Spinal cord injury survivor and active-duty Airman Randy Rodriguez plans to walk again. Initially unable to move so much as his toes after an abnormal blood vessel burst in the back of his neck, Randy, 21, started to make huge gains at Madonna Rehabilitation Hospitals, including walking with assistance. Randy came to Madonna from Whiteman Air Force Base in Johnson County, Missouri, following multiple surgeries at Research Medical Center in Kansas City. He credits his military training, the use of specialized technology and the support of his father, Enrique, as reasons for regaining his independence.

“My dad is my biggest cheerleader,” Randy said. “It motivated me that I can do this. I would think that something is impossible, but if I can do this, I imagine what my dad is going to think.”

Integrating family into the rehabilitation journey is part of Madonna’s holistic approach to patient care.

“His dad was always there, supporting him and giving him the encouragement he needed in therapy,” Rhonda Steckelberg, a physical therapist assistant, said. ”I saw how it brightened up his attitude in therapy, but it also made a positive impact on all of us here, his whole care team.”

Initially, an important aspect of Randy’s recovery was managing his pain level so that he could actively participate in his intensive therapy schedule. While at Madonna, patients receive daily physician visits to closely monitor their medical condition and direct the efforts of an interdisciplinary care team. 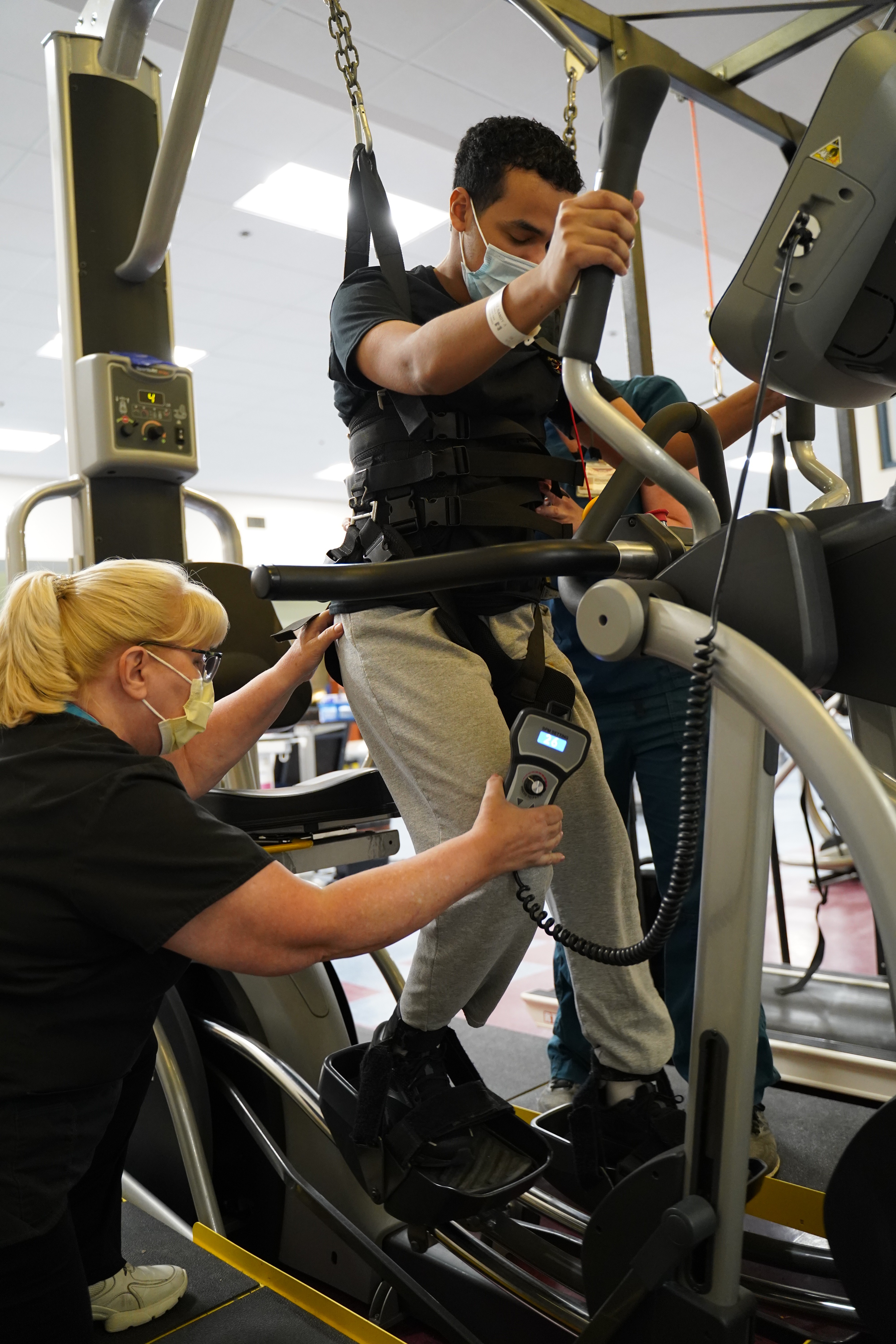 “We got to see a physician every day, and the doctor listened to Randy and his body,” Enrique Rodriguez, Randy’s father, said. “They were able to closely monitor and manage his medical condition; I never had one concern.”

The support of Randy’s father and care team allowed Randy to focus on his goal of walking again. He found the Lokomat, a robotic rehabilitation device that provides movement training, to be extremely helpful in reaching his goal.

“The Lokomat gives you a repetitive motion in the pattern of movement that you are desiring to start walking,” Janelle Hansen, an inpatient physical therapist at Madonna, said. “You can also program in challenges to help coordinate the brain and body to work together to speed up or slow down. After the Lokomat session, you want to get on the ground to see if you can carry over those strategies.”

Additionally, using what he learned on the Lokomat, Randy could walk 800 feet after two weeks. That progress continued to grow during his stay, until he eventually walked out of Madonna, with very little assistance.

Randy is now home in Long Island, New York. He is continuing physical therapy with hopes to be back on track to active military service next year.

To see coverage of Randy’s success story click on the link below. https://www.1011now.com/2022/06/20/father-supports-veteran-son-during-days-rehab/

Survivors of a spinal cord injury may have to navigate life differently after an injury, but it doesn't mean an end to the passions or hobbies they o...

LAWYER READY TO GIVE BACK AFTER SPINAL CORD INJURY

An aspiring lawyer, Shantel Thompson’s dreams of helping her community were put on hold after the unthinkable happened. She was shot and suffered a ...