Brady Beran straightens his signature tie and logs into his computer. It’s a typical start to the workday for many employees. For 30-year-old Brady, it’s nothing short of miraculous.

On Sept. 24, 2004, Brady nearly died after suffering a second-impact concussion during a high school football game in his hometown of Lincoln, Nebraska. The helmet-to-helmet collision caused a blood clot to press on his brain and he was rushed into emergency surgery. “I was given less than a five percent chance of survival,” Brady said.

He endured four additional surgeries, a stroke and pneumonia, before emerging from a five-week coma. The prognosis was grim. Doctors predicted Brady might not smile or verbalize again. But they underestimated the young athlete and his prayer warriors. “God saved me for a reason; I was happy to be alive!” Brady said, adding family support played a pivotal role.

When Brady arrived at Madonna’s Lincoln Campus, it took five people to help the standout football and soccer player take a step. The 4.0 honor student struggled to read a kindergarten-level book. Brady spent months in aggressive therapy relearning to feed himself and talk.“I tested the patience of my nurses and therapists, but they continued to love on me,” he said, with a smile.

After his brain trauma, Brady’s personality changed. “I used to be shy—I remember that guy!” recalls the self-described extrovert. His newfound boldness, balanced with faith and humor, encouraged healing. A tenacious worker, Brady surrounded himself with positive people. “My best advice is don’t focus on what you can’t do, but what you CAN do,” Brady said. His game plan for success worked.

Brady’s accomplishments post-injury are remarkable. He graduated from high school in 2006, earned an associate’s degree in 2009, then two years later walked across the stage at the University of Nebraska-Lincoln to collect a bachelor’s degree.

A year later, Brady met Amber Kucksdorf, the love of his life, and they married in 2012. “She accepts me as I am, lifts me up, but holds me accountable,” he said, adding that faith and humor enrich their relationship. “Once Amber challenged my ‘old man’ shoes,” laughs Brady, who found Velcro straps easier. “Laces are hard! She gently encouraged me until I mastered it.”

In 2014, the couple relocated to Wisconsin where Amber is a school teacher and Brady works as a customer care professional at Thrivent Lutheran.
“I like interacting with members and solving their problems,” Brady said. He and Amber love socializing with friends, playing board games and bowling. They share a passion for football; he roots for his beloved Huskers, she’s a Packers fan. Starting a family is a high priority for the couple.
“I’m excited to become a father; it’s all in God’s timing,” Brady said.

The teen who beat the odds grew into a man living a purpose-driven life. Brady advocates for concussion awareness and is writing a book about his recovery. He considers each day an amazing gift. “God saved me and Madonna gave me back my life.” 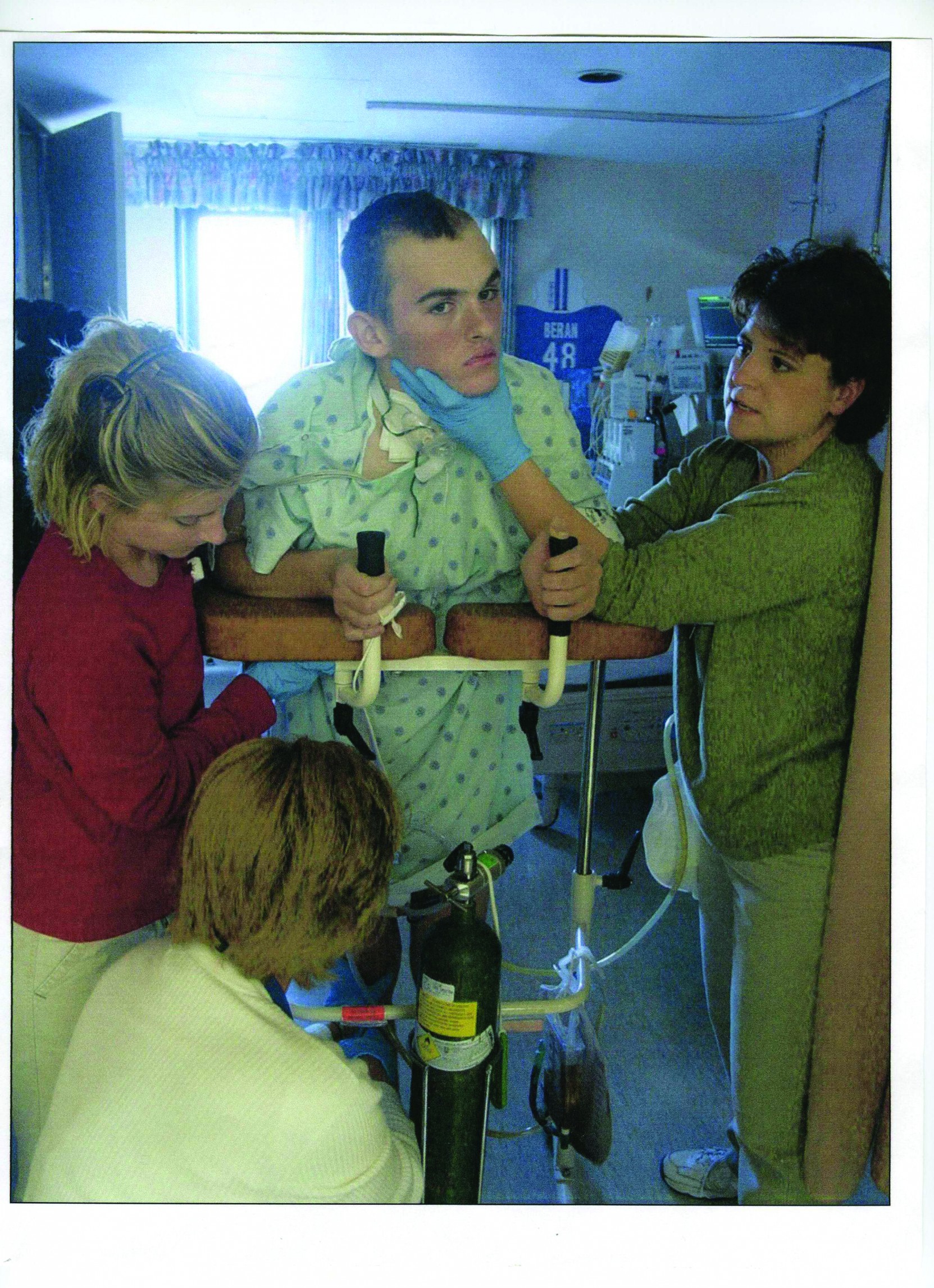 In 2004, 17-year-old Brady Beran stands for the first time at Madonna’s Lincoln Campus, assisted by members of his recovery team. Brady suffered a second-impact concussion in a high school football game.