After suffering a serious and sometimes debilitating injury, coping with the harsh reality of change can be hard. Kelli Pellman learned change comes hard and fast when she fell off the back deck of her home in the Kansas City suburb of Lenexa, Kan. on June 8. The deck had been damaged by a recent storm, but having the family, including her two teenage sons, all together on a Saturday night brought them outside. “We grilled out, they brought their music and we were all kind of dancing,” the 46-year-old said. “My husband and I did not dance very well. We tripped over each other, somehow got to the other side of the deck and fell right off.” Kelli landed on her back. Her husband, Scott, fell on his head. The boys called 9-1-1 and their parents were rushed to Overland Park Regional Medical Center. “Scott and I got matching cervical collars,” Kelli said, smiling. Kelli’s injury, though, was far more serious. She fractured her C5-C7 vertebrae and suffered an incomplete spinal cord injury. “I really didn’t have much feeling from the neck down,” she said. “I could wiggle maybe a toe or two.” Following surgery to fuse her fractured vertebrae, Kelli transferred to Madonna Rehabilitation Hospitals – Lincoln Campus to begin her rehabilitation journey. “They asked me what my goal was right away, and I said ‘To walk,’” Kelli recalled. “And it was emotional to say that because I didn’t know if that was going to happen or not. I just thought, I’ve got to do whatever it takes to walk again.” A nurse herself, Kelli wasn’t on that journey alone. She quickly formed connections with her expert team of doctors, nurses and therapists. That teamwork proved to be handy on her rehabilitation journey. When Kelli experienced low blood pressure issues relearning how to stand, Physical Therapist Sara Hohensee and Spinal Cord Injury Program Medical Director Dr. Paul Krabbenhoft worked together to troubleshoot the problem. “Sara had the foresight to get me on the Lokomat,” Kelli said, describing Madonna’s robotic treadmill training system that helps with basic walking functions. “The Lokomat has a harness and it was the harness that was helping to keep my blood pressure up. Sara and Lori [Holz, another physical therapist], then said ‘let’s just use this harness,’ a 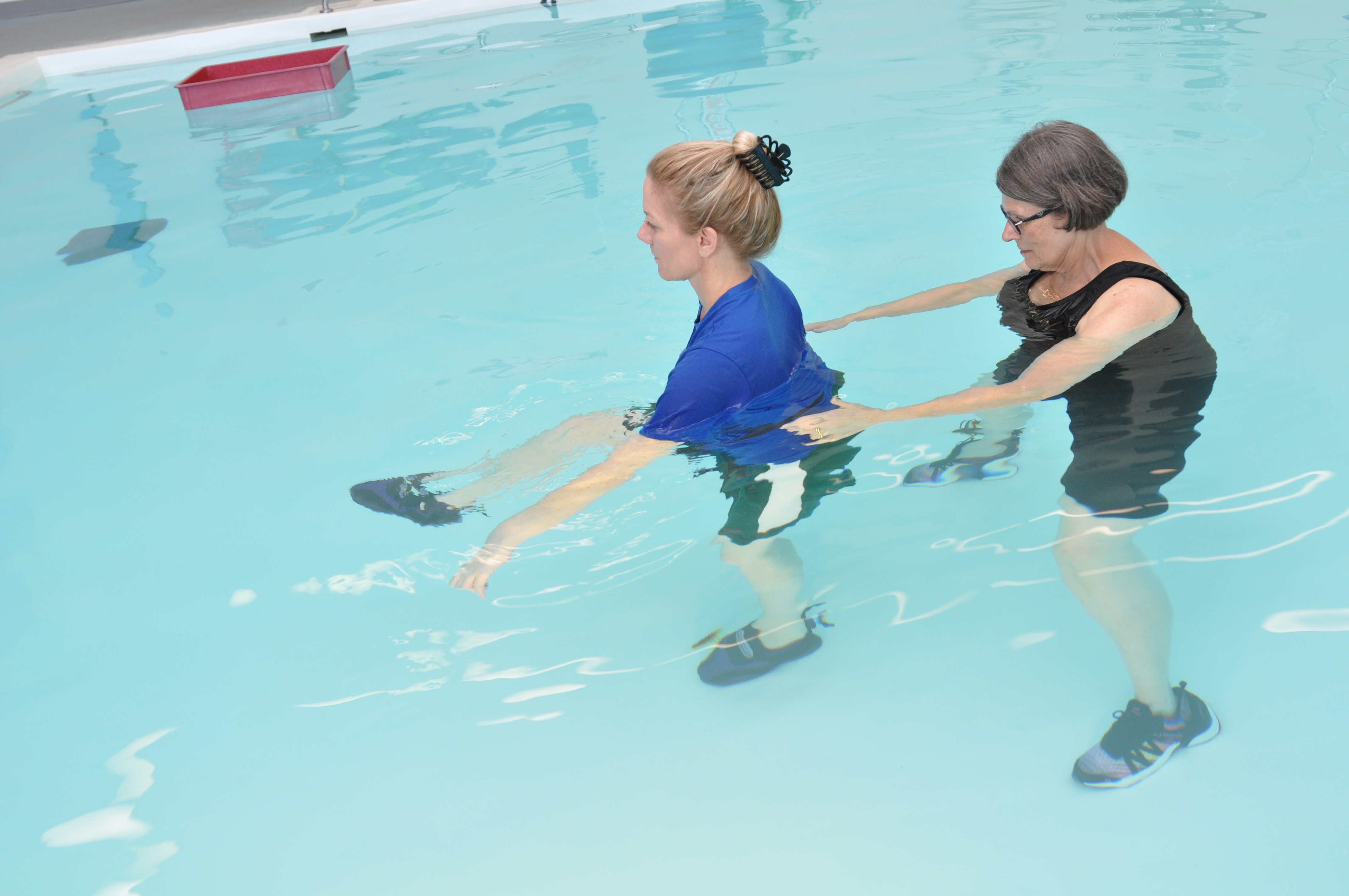 nd with that I was able to get up and use the walker.” Kelli’s big breakthrough came during aquatic therapy. The pool, which maintains a temperature hovering in the mid-90s, adds buoyancy and loosens up the muscles. Her instant connection with Sarah Stevicks, a physical therapy assistant, motivated her to get back on her feet. “I remember the first time she told me I was going to walk, she told me ‘Yeah, do it! Go ahead,’” Kelli recollec 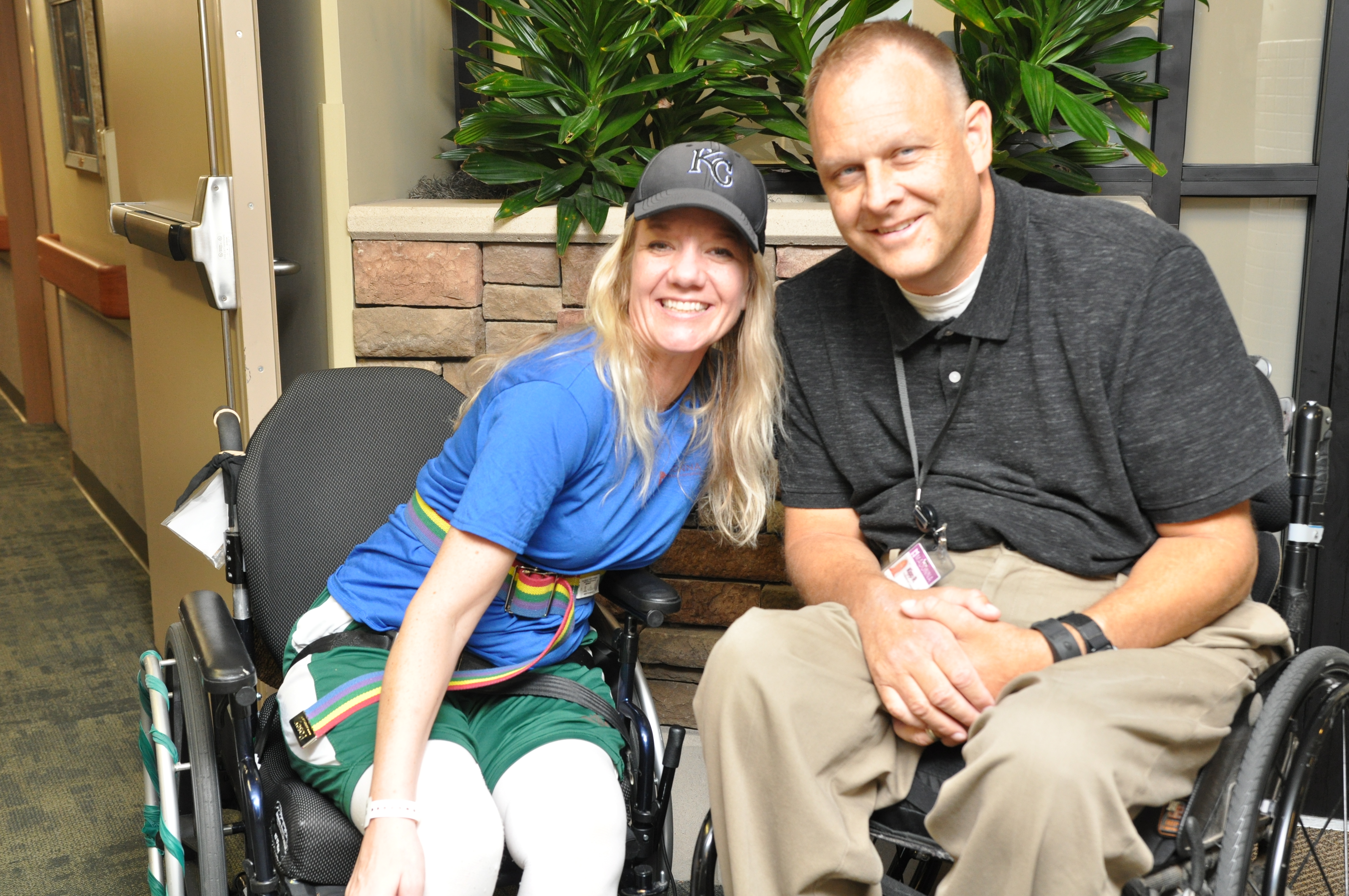 ted, “I took those first steps and I was able to walk in the water. How good that felt! It was amazing.” Therapy does not come without trials and tribulations. Enter another key relationship: Kipp Ransom, MA, LIMHP, a member of Madonna's neuropsychology team. He, like Kelli, is a spinal cord injury survivor, and offered sound advice and encouragement as she progressed.  “He encourages you to just push on because it can be done, and it has been done here,” Kelli said. “It’s very, very intimate when you go through something like this. Those people make such a difference in your life, an important difference.” Kelli also found solace in her fellow injury survivors. Those connections formed in her first peer support group for spinal cord injury survivors made a lasting impression. Together, they learned more about what to expect with their new reality. “I realized that we’re all in this together, and to have that relationship as we are all going through [rehab] helped me immensely,” Kelli said. “I felt like as we encouraged each other, we get encouraged ourselves.” Two months after her accident, Kelli stood out of her wheelchair as Scott captured her first steps across the therapy gym with her walker. The confident wife and mother continues to heal at a post-hospital center with the goal of returning home. To learn more about Madonna's innovative and expert approach to spinal cord injury rehabilitation, click here.