Brandon Breunig credits aquatic therapy with helping him regain movement early in his recovery from a spinal cord injury in April 2016. Instructing Brandon on his form is Sarah Stevicks, physical therapy assistant.

Brandon Breunig caps off his high school basketball career with a gold medal around his neck. This is after helping the Wahoo Bishop Neumann Cavaliers clench the Nebraska Class C-1 state championship title for the second year. In the final game, he took the court with less than a minute to go and attempted two baskets—one of them a three-pointer. Brandon had possession of the ball when the buzzer sounded signaling the end of the game. “Being back on the court with my boys, remembering all the good times we had playing basketball. It was a great feeling,” said Brandon.

While his basketball stats this year may not sound impressive, Brandon’s story of perseverance is remarkable.  His comeback to the court comes after a one-vehicle crash in April 2016 caused a spinal cord injury. The crash affected his L4 vertebra and caused temporary paralysis below his waist. “Walking to the hospital, and just not thinking he was going to live, so it’s very special to me,” said Cavaliers’ Coach Mike Weiss.

Brandon’s teammates and coach were emotional about his recovery. “For me, we wanted to do this for Brandon, that was the most important thing, just to get a medal around his neck,” senior Jaxon Simons said.

“And when I saw him out there it honestly brought a tear to my eye. Just seeing him out there, we didn’t know if he was going to make it, and now he’s out here and he’s shooting a three. It’s amazing. We’re really lucky to have him back.”

Brandon had surgery and spent 11 weeks recovering at Madonna Rehabilitation Hospitals-Lincoln Campus. Brandon is 6 foot 6 inches tall; his parents chose Madonna due to his height and the hospitals’ innovative therapy and equipment. Aquatic therapy allowed him to regain movement early on.  The Lokomat helped him improve his gait pattern. The bionic suit known as the Ekso Skeleton GT helped him shift his weight. From the beginning, Brandon’s attitude was one of determination. “Don’t feel sorry for yourself. Get up every morning and get to the gym and work as hard as you can to get back to normal. I had a week in the hospital to feel sorry for myself but now it’s time to get to work.”

Early on, Brandon successfully completed his goal to show his pig at the Saunders County Fair using a walker. He also continued gaining strength and movement back through Madonna TherapyPlus outpatient sessions twice a week. Returning to school during football season, Brandon played coach instead of suiting up as a starting lineman. The reality that he wouldn’t be able to suit up hit him during the season home opener. “The first football game, every single coach and teammate came over and gave me a hug. It was very comforting.”

Today, Brandon looks forward to college in the fall to pursue a degree in precision farming. He continues outpatient therapy and says his next goal is to lose the cane for good and run. He also plans to play in the annual alumni basketball tournament next year. “This experience has made me look at the bigger picture of life. Playing sports doesn’t mean the world to me like it used to. It’s just one aspect of my life. I’ve had thousands of great memories and a whole life ahead of me,” said Brandon. 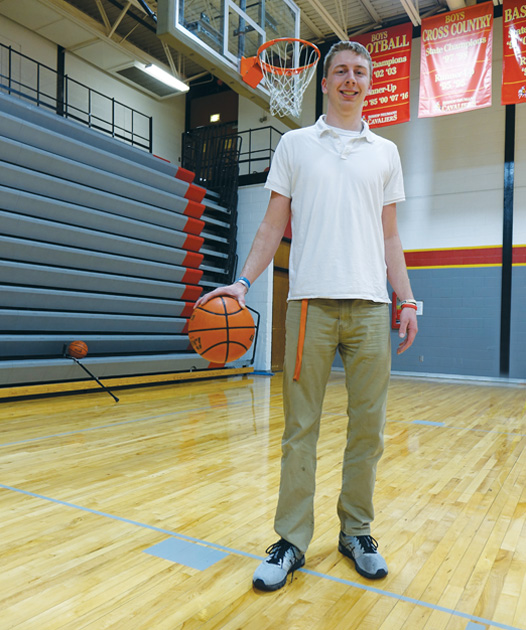 Bishop Neumann Senior Brandon Breunig stands tall on the basketball court after recovering from a spinal cord injury and vows to one day compete in an alumni basketball game.