John Abkes’ family, including his wife Julie (center) and daughter Jennifer Mcivor and her husband Nathan,  played an important role during his rehabilitation from a spinal cord injury. (Not pictured: John’s son and daughter-in-law Luke and Kjirsten Abkes)

John Abkes describes himself as the main character in a story God is telling, with family, friends and a mass of health care professionals in supporting roles. In this part of his story, the Omaha, Nebraska, man is recovering from a spinal cord injury caused by a strong wave slamming him into the ocean floor while he was vacationing with wife, two grown children and their spouses in Cabo, Mexico, in December 2016.

“From what I understand I was, I don’t know the technical medical terms for it, but dead’s the word that I have for it. And so they brought me back,” he said.

His daughter and son, Jennifer Mcivor and Luke Abkes, pulled him from the water, and Jennifer, a registered nurse, began CPR. “I remember just doing my compressions and pleading to God that this not be the last memory I have of him,” Jennifer said.

He survived and was eventually flown to Methodist Hospital in Omaha. John started his recovery journey in acute rehabilitation at Madonna in Lincoln, and continued outpatient therapy at Madonna’s TherapyPlus Omaha Campus location.

“It all started with an initial evaluation when I was in Lincoln and I could really just move two feet and one finger. And so if you think about it, that’s where we started,” John explained, after finishing outpatient aquatic therapy  in Omaha. “And you think about me walking out of Lincoln, and then about that I’m actually able to drive to my therapy here today is nothing short of a miracle.”

John’s wife Julie, and their children supported him in Lincoln, participating in every therapy. “We’re blessed at Madonna. They let us go to all the therapy sessions, so between the three of us, someone’s always there,” said Jennifer. “They teach us everything and let us be so hands-on with him. And I think, for us, it helps us see that he’s not so fragile as we remember him being. We see him getting stronger.”

John has a long list of names of Madonna staff credited with helping him along the way. “Lindsay [Tuxhorn] occupational therapist in Lincoln, and Janelle [Hansen] physical therapist. And Sarah [Stevicks] in the pool. Those three people were just a special blessing in my life when it comes to this,” said John, as Julie and Jennifer chimed in with more names: Jennifer [Monroe] the nurse, Casey, both the guy [Bowling] and the girl [Kacee Harris], Amy [Taylor] and Sarah [Hamilton)] Heather [Dienstbier] and more.

Today, John is back to work, but still faces challenges, like muscle tension in his shoulders and missing some feeling in his fingers.

“Even though he’s done with outpatient therapy, he is faithful about doing the exercises, the stretches and everything to the T and beyond. And he does that so that the can have a quality of life with us,” said Julie.

“Faith, family, friends—the rest is just noise,” said John. “I’m really trying to make sure my calendar reflects my priorities more so now than it ever has. I think I’m making progress.” 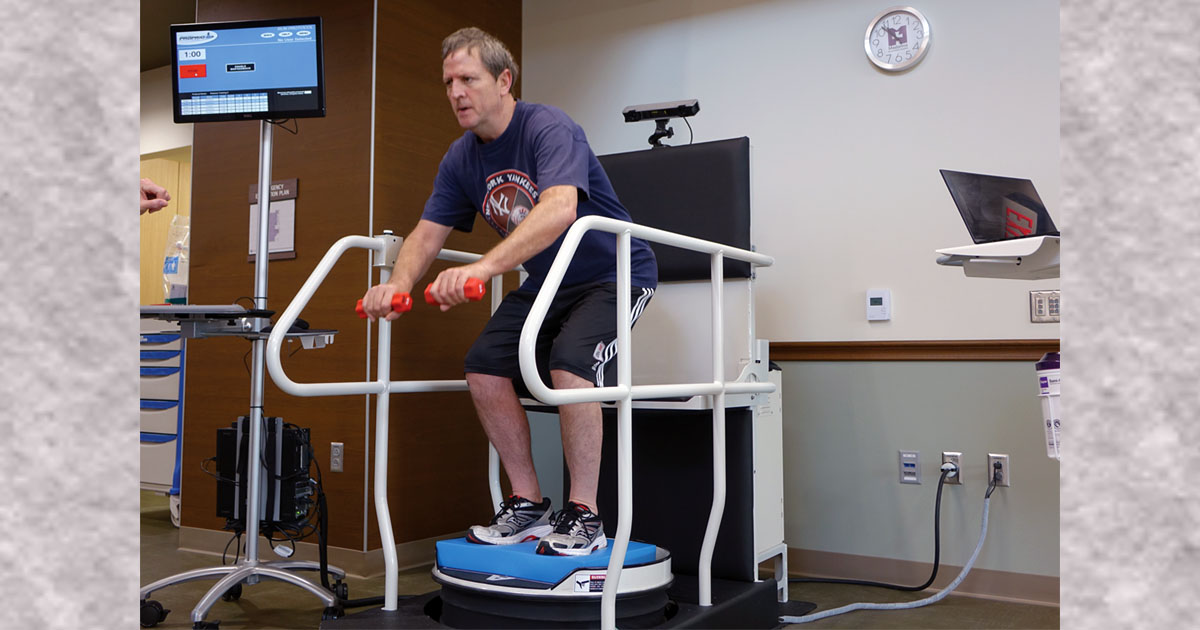 John Abkes works on his balance and stamina with the Proprio® 4000 during outpatient physical therapy at the Omaha TherapyPlus location. 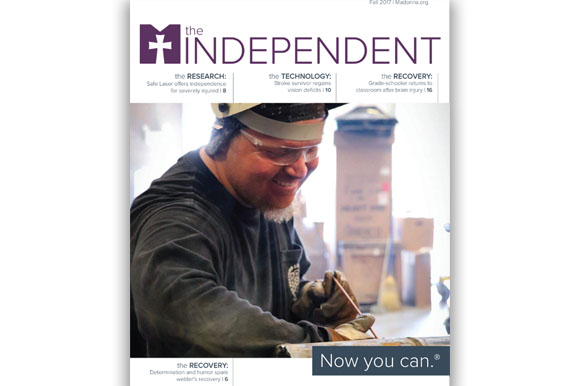