Myles Hibler (center) is grateful for the loving support of his family, including brothers Malachi (left) and Michael (far right), and his parents Michael Sr. and mother Pam.

Myles Hibler knows family is the tie that binds. After a life-changing spinal cord injury last year, his familial bond is even closer.

On June 23, 2016, Myles and his twin brother, Michael, were involved in a one-car rollover crash in Kansas City, Kansas. Michael sustained minor injuries, but Myles was rushed to the University of Kansas Medical Center for emergency surgery. “I was right there with him and I didn’t know if he would make it,” said Michael, who never left his brother’s side.

Prior to the accident, the inseparable 23-year-olds were busy planning their upcoming college graduations. The focus abruptly shifted to Myles’ recovery. Michael and his parents, Michael Sr. and Pam, leaned heavily on their faith. The outpouring of love and support from family, friends and the community, touched the family deeply.

A week after his surgery, Myles made the three-hour ambulance ride to Madonna Rehabilitation Specialty Hospital in Lincoln, Nebraska. The formerly active young man who loved playing basketball now required round-the-clock medical care. He was paralyzed from the neck down and unable to breathe on his own.

Initially, Myles had reservations and lots of questions. “It was a little scary at first, you know, new city, new state,” said Myles. “But the people here, they made my experience so much better.”

Supported by his devoted family and Madonna staff, the young Kansan began an individualized treatment plan with realistic goals. “Trusting your care team is a big part of the recovery process,” said Myles.

He was relieved to learn family-centered care is a priority at Madonna. The Hibler family actively participated in Myles’ rehabilitation. “The nurses and therapists made sure I knew my self-cares and how my family could assist,” said Myles.

While he confronted the daunting challenges of a new lifestyle, Myles’ family learned alongside him. “Madonna was excellent in preparing not only me, but my family as well,” said Myles.

After transitioning to acute rehabilitation, a crowning achievement for Myles was mastering his motorized wheelchair. His self-confidence soared with the newfound independence in his mobility.

Reconnecting with peers through social media, email and video games was another morale booster. Therapists taught Myles to use a QuadStick—a mouth and voice-operated mouse, keyboard and game-controller. The innovative technology allows Myles to compete against his brother in their favorite video games. “It’s been really fun getting to play against him again,” said Myles. The fun-loving sibling rivalry restored a sense of normalcy to life.

In September, Myles underwent a successful surgery to implant a diaphragm pacemaker. A game-changer, the device allows Myles to breathe independently, is quiet and doesn’t require the bulky tubing of a mechanical ventilator. Other benefits include normal breathing and speech patterns. “It’s been working out pretty good,” said Myles.

Shortly after Thanksgiving, Myles rejoined his family at home. “I look forward to what God has planned,” said Myles, who, along with Michael, recently graduated from Washburn University in Topeka. A master’s degree is Myle’s next goal.

He favors this quote by British writer Elizabeth David: “Every day holds the possibility of a miracle.”

Related story: Family is the most important part of therapy for Kansas graduate 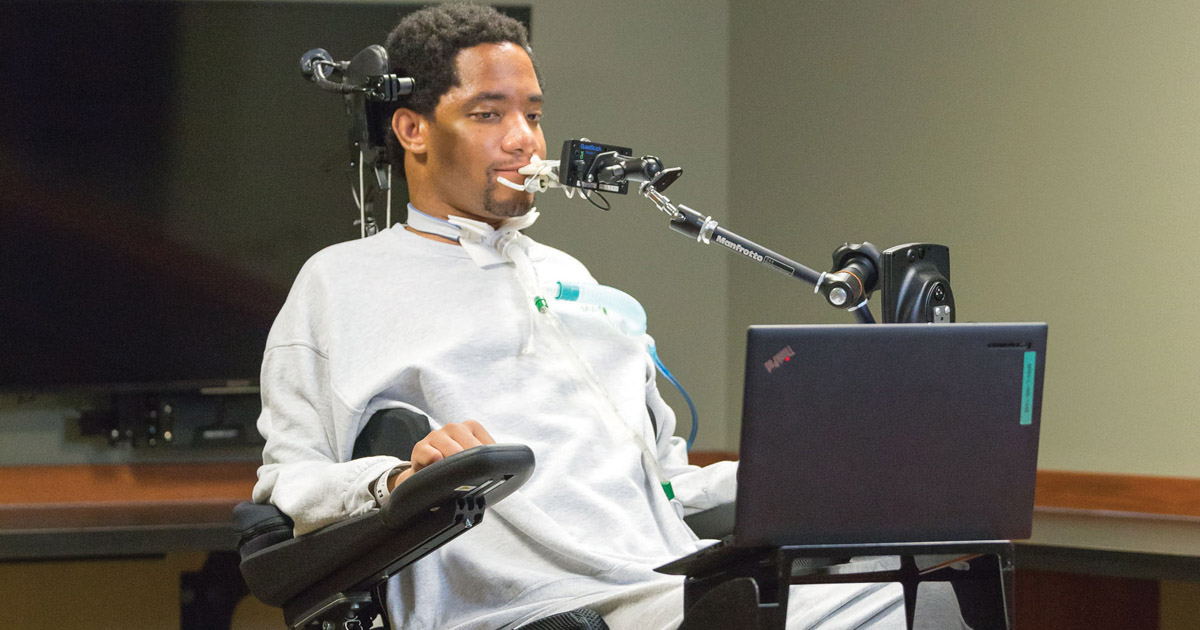 Generous donors supporting Madonna's Spinal Cord Injury Fund and the First Hope Equipment Fund helped purchase a mouth-operated gaming system for the hospital and one for Myles to take home with him. Using a Quadstick and sip and puff sensors, the equipment allows a gamer with quadriplegia to play gaming systems like Xbox.