In the pediatric specialty program at Madonna Rehabilitation Hospitals, Cooper Holloway can be found talking to staff about football, fishing and a recent trip to the archery range. Cooper is up and walking now, something he and his family don’t take for granted.

On September 26th, 2022, the eighth-grader from Abilene, Kansas, was at football practice as his team prepared for a rivalry game later that week.

“Before that practice, I was in the locker room and the coach was explaining that we need to beat our rival,” Cooper recalled. “I remember running outside, and that’s all that I remember.”

Dawn, Cooper’s mother, remembers getting the call that he got hit in the lower head and was losing feeling from the neck down.

“When we got there, he wasn’t completely aware of who we were and wasn’t making a whole lot of sense,” Dawn said. “They took him to our local hospital, but he lost consciousness between the two places. So they took him to another hospital where they saw the scans, and decided that he needed to go to a trauma unit. So three hospitals later, we went to Wichita.”

Cooper spent a week in the ICU at Wesley Medical Center as doctors tried to find out what was wrong. The Holloways returned home hoping that Cooper would recover from the concussion.

“As days went on, we saw things like being forgetful and balance issues,” Dawn said. “We would tell him things and he would forget. I was reaching out to the doctor over and over saying, ‘I think we need to get him evaluated again.’ We did some MRI’s and the scans looked the same so, no change is not always a good thing.”

“Even with therapy, we weren’t seeing a lot of change,” Dawn said. “We went to another neurologist who suggested we get evaluated again and so they sent us to Madonna. From there, it’s been go-time.”

Madonna is home to one of just seven accredited pediatric brain injury programs in the nation. Initially, Cooper and his family thought outpatient would be the answer at Madonna. But after tests and evaluation, Cooper found himself back in a hospital bed, the last place he wanted to be.

It didn’t take long for Cooper’s care team in the pediatric unit to realize his potential. Each patient at Madonna has an attending physician, and Cooper started working with Dr. Adam Kafka, a medical director at Madonna’s Lincoln Campus.

“Cooper had a very complex concussion,” Dr. Kafka said. “He had more severe symptoms than we typically see, especially with the weakness that developed on the right side of his body. Although imaging studies did not show any obvious injury to the brain or spinal cord, it is possible that he had bruising or trauma that was mild enough to not show up on scans but that could have led to his disability.”

Dr. Kafka added that it is rare to see concussions this severe that lead to inpatient rehabilitation.

“Dr. Kafka is great at leading the team,” Dawn said. “If there were any concerns, he would follow up on it. We’ve been in big hospitals before and it seems like you have all these teams and they don’t work together as well as they do here. If Coop’s having a rough day or he’s just a little down, they are able to bring in the team that will help him out.”

In between daily physical and occupational therapies, patients at Madonna enjoy adaptive sports and recreation therapy. In Cooper’s case, an afternoon spent at the Nebraska Outdoor Education Center was part of that rec therapy.

“That was really fun,” Cooper said. “Just being able to shoot a bow was fun.”

Possibly the most enjoyable day for Cooper came when players from the Nebraska women’s basketball team visited Madonna.

“The Huskers coming to visit bring patients encouragement during their stay at Madonna,” Kristin Luethke, a Madonna recreation therapist, said. “On the pediatric unit, having the Huskers engage in competitive games makes the therapists’ tasks much more enjoyable.”

Cooper, who’s a huge sports fan, made sure to take on Husker players in a little one-on-one. 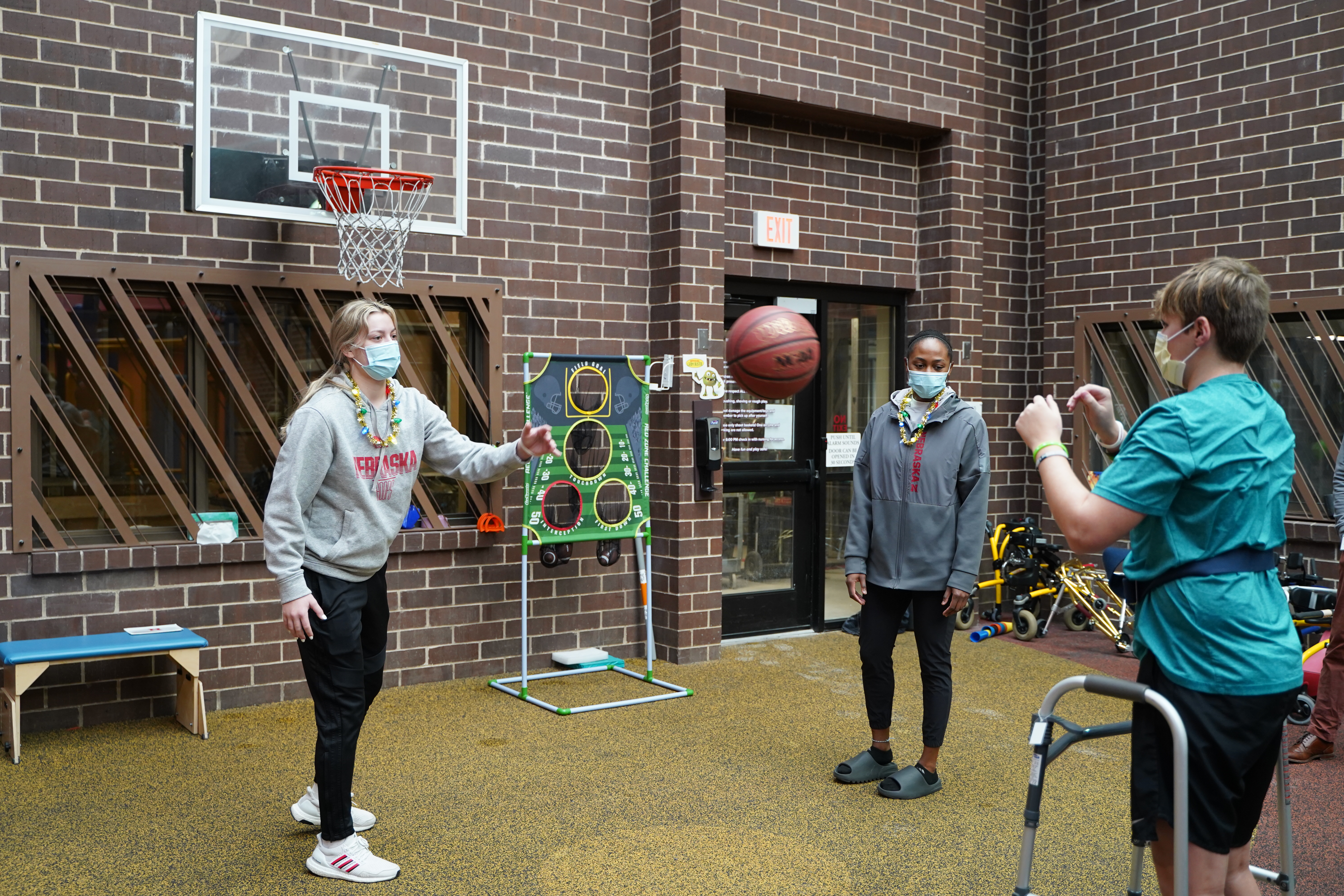 “Just being able to play basketball again and even though I was in my chair, I had a lot of fun,” Cooper said. “I think I won a game against them.”

Being from Kansas, Cooper is a big Kansas Jayhawk basketball fan. Ironically, Nebraska played Kansas the next night in Lincoln. With Cooper watching on, the Huskers won, 85-79 in triple overtime.

“I was going to root for Kansas, but after meeting the players, they’re just so nice. I had to go for Nebraska. It got really close with those three overtimes. I was nervous but Nebraska came back. It was a great game.”

Cooper is walking much more and his reading and speech have improved as well. Although he’s now back home, Cooper’s time at Madonna isn’t finished. He will continue his therapy in the Rehabilitation Day Program, which helps patients learn how to function more independently in their home and community.

“There are some facilities in Kansas that could work with him or we could just continue coming back here,” Dawn said. “We have seen so much progress here that we decided this is where we want to be.”

KANSAS TEEN A WALKING TESTAMENT TO HOPE AND HEALING

Caleb Tobias of Clearwater, Kansas, has defied all the odds stacked against him after a devastating car crash on March 6. The teenager arrived at Mado...