Dayton Copeland keeps a favorite Bible verse close to his heart. Inscribed on the silver cross that hangs around his neck: “I can do all things through Christ who is my strength. Philippians 4:13.” The Ness City, Kansas, teen, his family and friends, take comfort in the words and the meaning, especially in the days following Dec. 12, 2016. That day Dayton was involved in a two-vehicle car crash that resulted in a traumatic brain injury.

“Early on, we didn’t know whether he would make it,” said Angela Copeland, Dayton’s mom. Angela is a registered nurse and works at the hospital where emergency crews initially took Dayton before he was transferred by helicopter to Wesley Medical Center in Wichita, Kansas. Dayton suffered cuts and multiple broken bones in addition to brain trauma.

Doctors monitored him for eight days in intensive care and remained guarded about the future. “They told us every recovery from a brain injury is different,” said Angela. Angela’s medical background helped her understand the gravity of the situation, but she wasn’t prepared for how quickly his therapy started once he arrived at Madonna’s Omaha Campus on Dec. 21.

“Immediately they got him up and moving out of his wheelchair. It took two people to help hold his head up,” said Angela. “They started working that brain even when his body was asleep. It was amazing.”

The severity of Dayton’s injury initially required around-the-clock care. Madonna staff took an immediate liking to the teen, who loves being outdoors and anything sports-related. “Dayton was a super cool kid to work with. In the pediatric gym, I had him making baskets,” said Erick Busskohl, nurse aide.

“Dayton is someone that I had an instant bond with. From the first day he came to our facility, I worked with him a lot and did everything in my power to make him feel more comfortable. We would talk, walk and play darts for hours,” said Courtney Vanosdall, RN.

Dayton made slow progress over the holidays until New Year’s Eve when Angela said he seemed to wake up and started asking about family and home. Soon after, he properly identified brightly-colored rings during a physical therapy session. “We kind of looked at each other and said, ‘He knows things. He’s in there,’” said Angela.

Dayton’s progress meant his Madonna team had to make quick adjustments to his therapy schedule. “He was progressing so fast that we had to set higher goals for him more often,” said Abby Pauley, occupational therapist.

On Jan. 22, 2017, Dayton started the intensive TherapyPlus Rehabilitation Day Outpatient Program, spending four days a week in physical, occupational and speech therapies. Through the Therapeutic Learning Center (TLC), he reconnected with school. Toward the end of his therapy, he was reading “To Kill a Mockingbird” along with his classmates back home.

Dayton finished up inpatient therapy in early March and continues to work on balance, remembering multi-step directions and problem-solving skills. Guided by faith and surrounded by his family, friends and the community, Dayton hopes that his story can teach others. “I can tell people what happened and help them understand what a traumatic brain injury is and how important it is to drive safely,” said Dayton.

In the news; Ness City teen recovering from accident (The Hays Daily News) 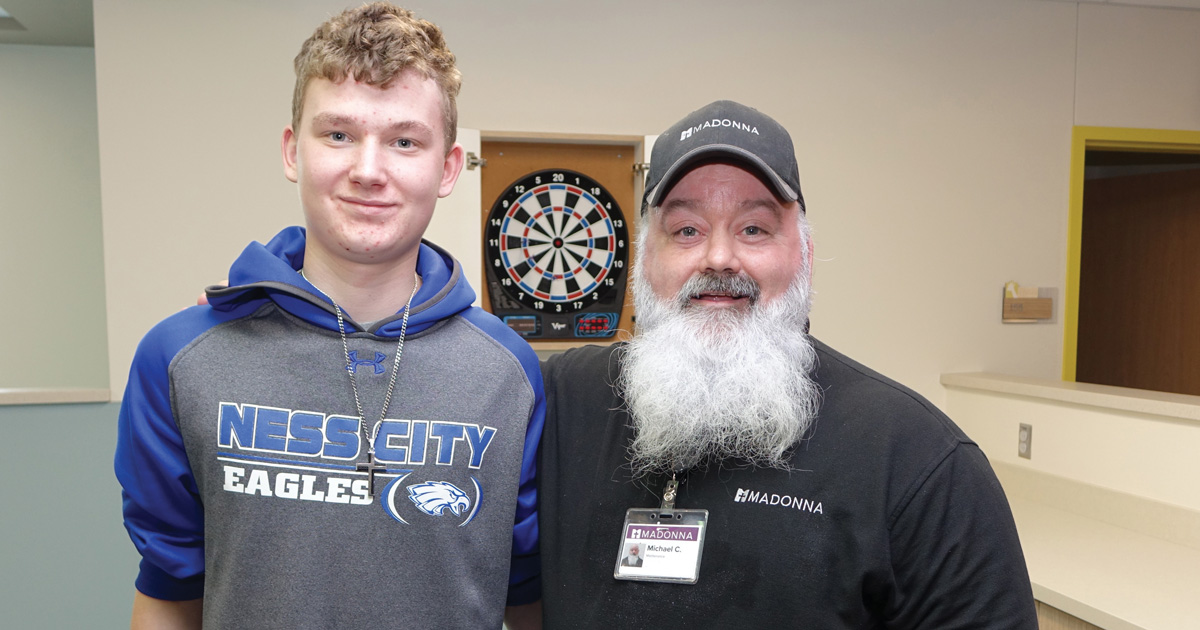 Omaha Campus Maintenance team member Mike Champagne bonded over darts with Dayton Copeland. The two played the game in the pediatric unit during Dayton's recovery from a traumatic brain injury.

I joined the Omaha Campus maintenance team in the fall of 2016. With the job came an unexpected reward: I’m proud to be part of being introduced to 16-year-old Dayton Copeland. This young fella came to our pediatric unit with severe injuries after a car accident. Initially, he wasn’t able to open his eyes and was physically unable to function properly.

As we put the finishing touches on the pediatric unit, I noticed Dayton making great progress on his road to recovery. A good support group is a vital part of any recovery. I witnessed how Dayton’s parents, our nurses and physical therapists never let him take his focus off his target to go home.

I was working Christmas Day and witnessed a family coming together to support their young son and brother. While I understand parents and family appreciate what our nurses and therapists do, I also notice when the staff never settles for defeat. These people keep our patients focused on the target.

While installing the dart board in the pediatric unit, Dayton excitedly asked when it would be ready. I answered, “Whenever you’re ready to play.” Dayton responded by challenging me to a game of darts. It was then I realized I had found a new friend and thanked him for making my job so rewarding. I saw firsthand how one can come from tragedy to becoming a hero.

Dayton transitioned from inpatient, to Rehab Day and was finally leaving for home. Before he left, Dayton handed me a thank-you card for installing the dart board. We also played a friendly game of darts. While I won, it gave me the opportunity to give pointers, including reminding him to keep his eye on the target to achieve success.

Madonna is not a word, a hospital, an education or even a facility; it’s far more than that. Look a little deeper to find a place where astounding staff get patients to hit their target and achieve their goals.