Carter Brown takes his first ride in a Power Wheels Jeep modified by engineers in Madonna’s Research Institute for Rehabilitation Science and Engineering. The adaptive vehicle helps the 16-month-old learn new skills to boost his independence.

A January afternoon joy ride in a battery-powered toy car was a significant milestone for 16-month-old Carter Brown and his parents, Chris and Katy.

“It was just really special. The joy it brought him right away, he just was so happy,” said Chris.

That drive through the halls of Madonna’s Lincoln Campus was in a Power Wheels Jeep adapted just for Carter by the Institute for Rehabilitation Science and Engineering. Wanting to help Carter learn new skills that are important for a toddler’s development, his parents approached the Institute months earlier with an idea inspired by Go Baby Go, a national organization that adapts powered toy vehicles for children with disabilities.

“One of the things we hope the car can do is give him that cause and effect awareness, as well, in terms of just being able to feel independent. He has been so frustrated lately, I think, because he wants so desperately to be able to move and he just can’t. And so this will be a way, I think, that he can have fun and be happy and have that sense of independent movement,” Katy explained.

“We said, ‘Of course, at the Institute, we like some “I worked with the remote controller. So the circuitry inside of the remote control was stuff that I went through and got to design and build for myself,” Heidi, an electrical engineering major, recalled.

A 3-D printer obtained with funds from the 2015 Goldwin Foundation grant was vital to both modifications.

The housing for the remote controller, which allows Chris and Katy to steer the car, was designed by Noah and 3-D-printed. As Carter grows and develops more cognitive and physical abilities, directional control can be switched back to the car for him to steer. challenges. We can handle that. But let’s take it one notch higher,’” said Chase.

The project required electrical rewiring and special design to add an acceleration button on the steering wheel for Carter to press, as well as radio frequency wiring for a remote control for his parents to use.

“Now, say there’s a dog in the backyard. He can drive around and play in the backyard with him. Luckily, it’s a Jeep Wrangler, so he can do some off-roading and just be out there and be a kid,” Chase added.

All that work left Carter’s parents impressed. “We know they’ve been working really hard for a long time and seeing the final product kind of modified specifically for him was just pretty cool,” said Chris. One could say it was clear by the smile on Carter’s face as he rolled down the hallway, he agreed, but that smile also had special meaning for his mom.

“We were given a pretty grim prognosis when Carter was born,” Katy said. “And so, when he started to smile, my heart started to heal and I think it just continues to do so every time I see him smile. Today in the car is another moment for me to be on that path of being able to heal fully.” 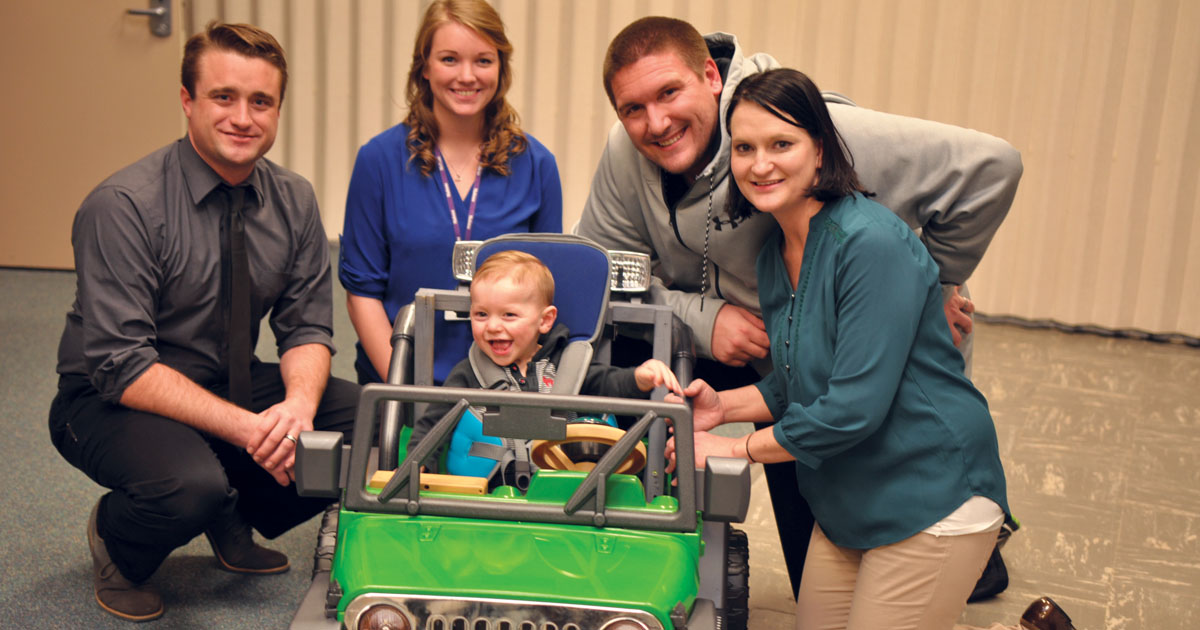 Carter's parents, Chris and Katy Brown (far right), said the smile on their son's face was awesome to see as he rode around in the adapted battery-powered Jeep for the first time and thanked the engineering team who worked on it, including Madonna Assistant Research Director for Rehabilitation Engineer Chase Pfeifer, Ph.D., (left) and UNL engineering student Heidi Kratzer. (Not pictured UNL engineering student Noah Kelley)