Racheal Johnson is counting down the days until Mother’s Day this year. While the 39-year-old mother of four usually looks forward to the special day, this one holds extra significance. Not only is it the day she’ll get to return to her home state of Iowa and be closer to her children, but it’s also a day she wasn’t sure she’d live to see.

Johnson was diagnosed with a brain tumor in January 2022. She had scheduled surgery to remove the tumor on March 3. However, during surgery, due to high intracranial pressure caused by the tumor, blood vessels in her brain collapsed, cutting off blood flow and leading to a stroke. As a nurse by trade, Racheal said she remembers laying in her hospital bed listening to what her doctors and nurses were saying, thinking those would be her last memories.

“As a nurse, I know quite a bit about things like this. But in this case, I knew about what was happening; I didn’t want to know,” Racheal said. “From my guess, I could’ve died three different times during and after surgery, and all I could think about was getting back to my kids.”

After a month at the University of Iowa hospital system, Johnson came to Madonna Rehabilitation Hospitals, ready to do whatever it took to return to her life roles as a wife, mother and nurse.

The stroke left a greater impact on the left side of her body, so her Madonna care team worked diligently to strengthen her left arm and leg. Using the Functional Electrical Stimulation (FES) bicycle, therapists were able to send targeted pulses to different muscles in her left arm and leg to help wake them up. Her care team knew from the first evaluations that Racheal was highly motivated.

“We often talked about working hard during our therapy sessions to maximize her independence and ability to provide care for her children,” Aubrey Adkisson, an occupational therapist at Madonna, said. “We discussed various techniques to increase 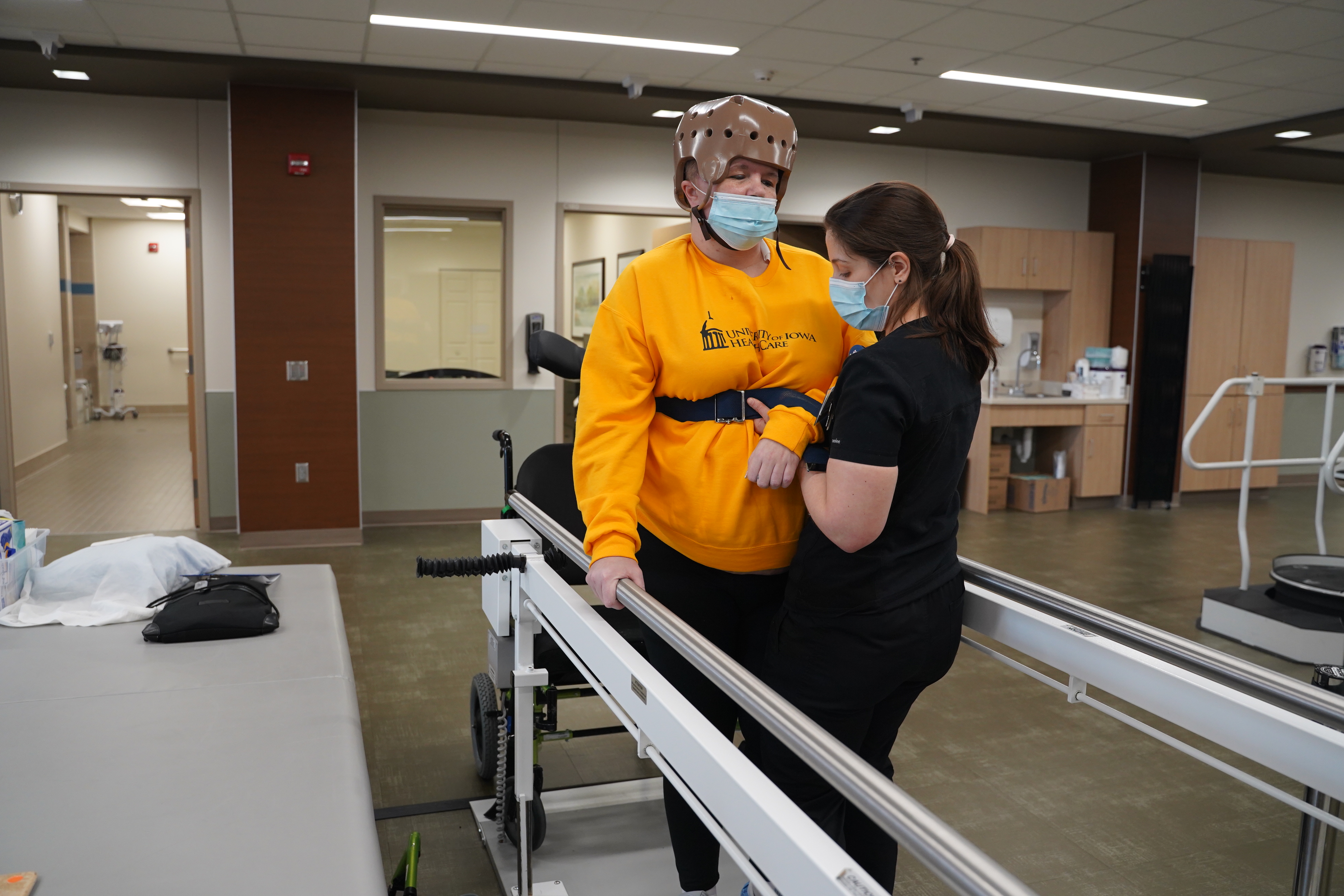 participation in her parenting role. During every session we worked together Racheal would say, ‘I need to be able to do this to get home to my kids,’ which highlights how much of a priority her role as a mother is.”

She also utilized the SaeboMAS, a zero-gravity support device designed to help increase motor response in muscles. The goal—to increase strength and the use of both arms.

“I would pull my arms across my chest for that, and I just thought about hugging my youngest son,” Racheal said.  “He’s 7, and my ultimate goal is to be able to pick him up again and hold him.”

In addition to her goal of taking care of her children, Racheal worked diligently on caring for herself independently. She frequently practiced dressing herself and one-handed techniques to be able to independently brush her teeth. In Madonna’s Independence Square, Adkisson worked with Racheal to navigate tasks such as loading clothes into and out of the washer and dryer and folding laundry to problem solve how she will return to doing her children’s laundry as well as her own.

As she prepares to leave Madonna, Racheal said she’s thankful for the progress she’s seen in her walking and vision, and the friendship her care team showed her during her stay.

“Therapy has been amazing, and the nursing care here is top-notch,” Racheal said. “Having worked in a lot of different facilities, I’ve been so impressed here.”

Racheal said her 17-year-old daughter has been inspired by her rehabilitation journey and is interested in going into health care. Seeing a child willing to pay it forward and care for others in a similar situation is a great gift for any mother.

When Steve Mizner's partner of 16-years was diagnosed with stage 4 cancer, he stepped up to help take care of his family. Then when Steve suffered...

Celebrating GOAL Awards virtually this year, we decided to revisit some of our past winners to see where their journey has taken them since receiving ...