Part of Doreen's rehabilitation program utilized the pediatric Lokomat, a robotic assisted device on a treadmill.

Program Snapshot: The Adolescent and Children’s Program is designed with young patients in mind. A child’s family and close friends are an important part of the rehabilitation program. All are encouraged to participate in therapy sessions and learn new ways to make daily activities therapeutic and fun.

“I’m a unicorn!” Doreen Mshana exclaims with a laugh. She gestures to the spirals of dark hair, tightly wrapped in colorful bands, jutting out of her scalp. It’s a comforting place in the 12-year-old’s mind; far from the life-changing tragedy that propelled her halfway around the globe.

Doreen is one of three children who survived a horrific bus crash on May 6, 2017, in her homeland of Tanzania, Africa. Thirty-two of her classmates, two teachers and a bus driver were killed when their bus plunged off a steep ravine. Along with the emotional trauma, Doreen suffered facial injuries, multiple fractures and a severe spinal cord injury.

After several major surgeries, Doreen arrived at the Lincoln Campus partially paralyzed and using a wheelchair. Despite battling fatigue and extreme pain, her eyes shone bright with determination. Doreen’s closest supporters, her mother Grace Christopher and Tanzanian orthopedic surgeon Dr. Elias Mashala, stayed by her side.

The athletic girl who loves soccer and basketball established one mission: to walk. “That was her functional goal,” said Sarah Economides, PT. “But, often she’d tell people ‘I want to fly!’” recalled Economides, smiling. It was this blind ambition that drove the young girl’s rehabilitation.

During daily therapies in Madonna’s specialized pediatric rehabilitation unit, Doreen slowly established trust with her team, one conversation at a time. As her legs strengthened under the repetitive motion of the ICARE motorized elliptical, Doreen shared dreams of becoming a doctor. In aquatic therapy, where the water’s buoyancy spurred her confidence to walk, Doreen confided she missed her friends. A discussion with her Therapeutic Learning Center teacher revealed the seventh-grader’s fluency in three languages. Trust led to healing.

“I was in awe of Doreen’s strength of character and spirit given her young age,” said Economides.

Within five weeks, Doreen walked tall under the arched rainbow outside the pediatric unit, returning home to her family, a new school year and, most importantly, to life. 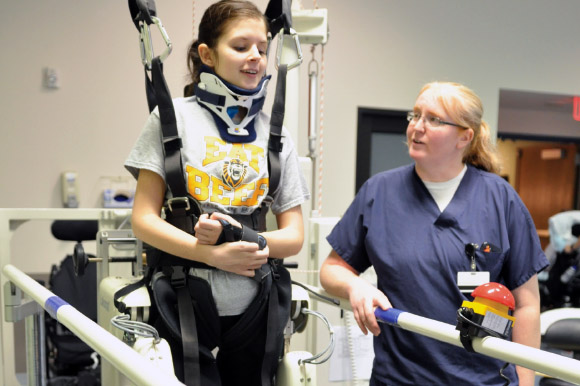