Elias Heppler loves anything artistic. That’s even his Instagram handle, where he makes and sells a variety of crafts—from jewelry to pottery to paintings. The 23-year-old is eager to get back to his business, after a months-long recovery from a brain injury sustained in a car crash in June.

Elias doesn’t remember much from his time in the intensive care unit at Sanford Health in Sioux Falls, but his mom, Heidi, recalls it all too well.

“My husband is a nurse, and he was working at the hospital and he got the call first about the accident,” she said. “Then, he called me, and my mind was just whirling. You just start waiting. Your whole life stops and you just start living moment by moment.”

For eight weeks, the Heppler family waited for a miracle. The future was uncertain. Elias battled through collapsed lungs and sepsis. At one point, he had five different chest tubes keeping him alive and breathing. Finally, in July came an answer to their prayers. Elias was medically stable enough to transfer to Madonna Rehabilitation Hospitals in Omaha to start the next phase of his recovery.

“When we were looking for a rehabilitation hospital, we immediately knew Madonna was the place we needed to be,” Heidi said.

Madonna’s certified brain injury specialists are experts in caring for injuries like Elias’s. From day one in the specialty hospital, his physician-led care team developed an aggressive treatment plan to get him back to his life roles.

“The day we got to Madonna, he was 114 pounds,” Heidi recalls. “He had a lot of muscle wasting. He wasn’t talking, and he wasn’t walking, and he was in a tilt wheelchair, moving his left hand and arm just a little bit. He was very floppy, and that’s where it started.”

Madonna’s specialty hospital is thoughtfully designed to facilitate brain injury recovery, with physicians rounding with patients daily, 24-hour nursing care, leading-edge technology, the latest evidence-based research and neuropsychologists who guide patients and families through the mental health aspects of recovery. Elias emerged quickly through an individualized care plan of intense physical, occupational and speech therapies. He and his family made sure to celebrate every victory, big or small.

“It was such a relief when he emerged to a point where he could say who you are,” Heidi said. “You don’t know if they’ll remember you. In Elias’s case, he did remember me. He remembered his dad. And when he asked who I was, he said, ‘My mother,’ and ‘She’s the one that loves me,’ so that was really cool.”

As Elias moved through Madonna’s complete continuum of care, Heidi documented his incredible progress through photos, videos and a special journal.

“I was hoping that someday he would read it and want to see the pictures,” she said. “Because so much happens so fast, I just knew that I had to start. A lot of days, it was overwhelming to write down everything that happened, but I did. Because at the end of the day, you’ve had so much thrown at you, it helps you process everything that’s happened.” 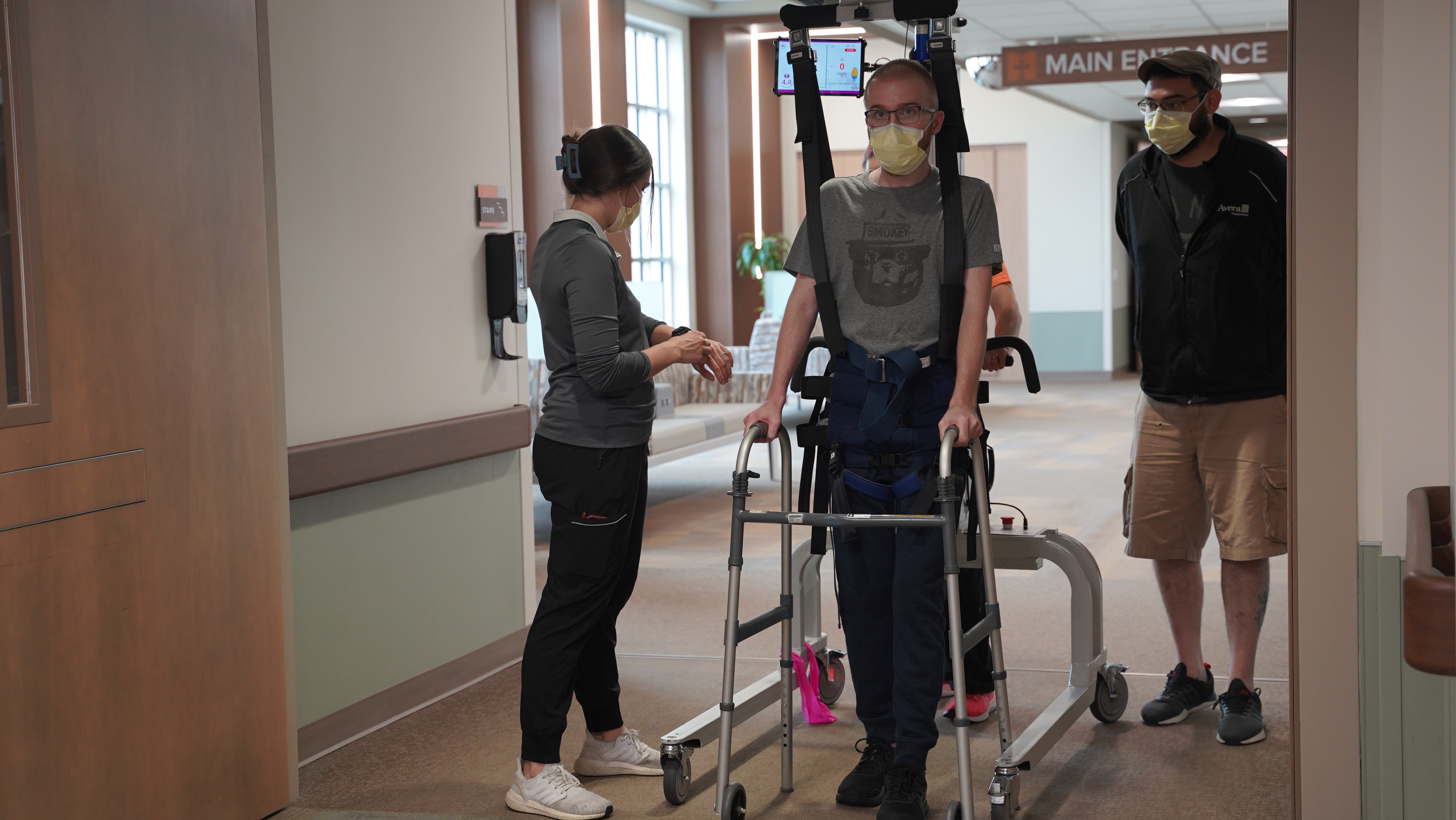 Having friends, family and loved ones with him every day gave Elias the motivation he needed to push himself in therapy. They were able to show him the progress they had documented as well as undergo extensive caregiver training to help him toward independence. His care team also tapped into his passion to encourage his recovery further.

“I would like to get back to my business making jewelry and just taking care of my plants like I used to,” Elias said. Occupational Therapist Abby McClure made sure those goals were worked on extensively in sessions.

“He initially did not have a lot of use with his right arm, so we immediately started to get that arm working again to then get him doing this jewelry making,” McClure said. “It was really fun to incorporate something so meaningful and important for him into our sessions, and that just goes to show why we’re here. That’s why we do what we do for our patients. He lit up every time we got to work on his jewelry.”

As Elias’s strength and coordination improved, he went on several outings with therapy to simulate returning to his daily activities. The first stop was to a local craft store to pick out the specific tools and materials necessary for jewelry creation. The second outing was a trip to Main Street Studios in Elkhorn, Nebraska, to meet with the six artists who work there and get inspiration for his next project. The owner of Main Street Studios, Tyler Curnes, recovered from Guillain-Barre syndrome at Madonna in November 2021. He now partners with Madonna’s recreation therapy team to offer community outings to his glass studio. For Elias, the trip was a great opportunity to practice community reintegration and be around other creative people.

After 10 weeks at Madonna, it’s time for the next chapter in Elias’s rehabilitation story. His focus is on returning home and celebrating just how far he’s come, and how far he’ll go.

“Don’t give up because there’s always hope,” Heidi said. “I had no idea what therapies could do. I really thought that I would be taking care of my son the rest of his life, and it’s amazing what the therapies at a rehabilitation hospital can do.”

Jayslynn “Jays” Ramirez has always loved Christmas, and this year the holiday will mean even more to her and her family. That’s beca...