Sixteen-year-old Frederique ‘Freddy’ LaDeaux is a man of few words.

“He doesn’t complain; he just does what is asked of him,” Abby Pauley, a Madonna occupational therapist, said.

That grit and determination are what Freddy’s Madonna care team credits with his success throughout his rehabilitation journey.

Freddy contracted COVID-19 in December of 2021. He spent the Christmas holiday, New Year, and his birthday in the intensive care unit at Sanford Health in Sioux Falls, South Dakota.

“He didn’t deserve any of this,” Gena LaDeaux, Freddy’s mom, said. “But, he’s a fighter. He fought for his life at the hospital and [he] fought to get back to his life while at Madonna.”

After three months in the acute care hospital, Freddy came to Madonna Rehabilitation Hospitals in March 2022. He was weak and still required a ventilator to breathe. From day one, Madonna’s physician-led respiratory therapy team oversaw his care and set a goal to wean him from the ventilator.

“When I first met Freddy, it was 8 a.m. as I was coming in to do a treatment,” Tabatha Williams, a respiratory therapist, said. “I noticed that his trach was plugged and needed to be changed. He was in tears not wanting it done. He let me turn on some music on his phone and finally trusted me to change it.”

Weaning someone off a ventilator takes time, and the process has its ups and downs. Madonna’s experts in respiratory therapy guide patients and their families through the highs and lows and customize care plans to each person’s needs.

“He needed a lot of oxygen at night, which slowed the weaning process,” Williams said. “During the day, he would do great, then every night requiring up to five liter of oxygen.”

Respiratory therapists worked with Freddy by doing extra airway clearance treatments and lung volume expansion therapies during the day, which helped with weaning off the vent at night. Madonna is on the leading edge of COVID-19 research and treatment. Madonna’s Institute for Rehabilitation Science and Technology researchers are trying to understand the damage the disease does to the lungs, its common symptoms and long-term impacts. In addition, Madonna’s post-COVID clinic treats hundreds of patients just like Freddy, who need extra support to beat the disease.

“The healing process is not one that can be seen by the naked eye,” Williams said. “This recovery might take longer than anyone wants, but we try to help the patient understand the need for long-term medicine even when they’re feeling better.” 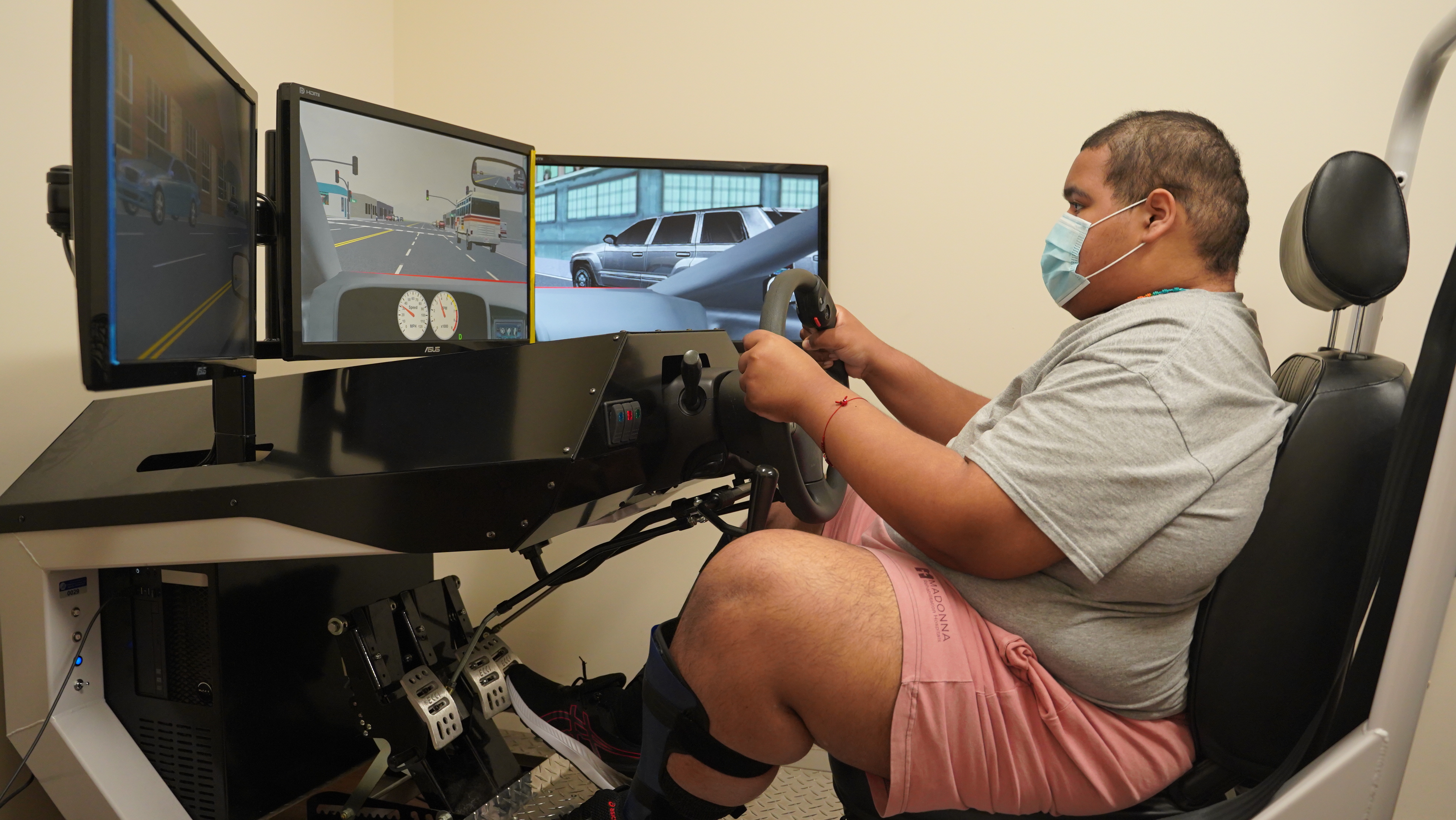 As Freddy regained his strength and stamina through daily intense physical, occupational and speech therapy, his personality began to show through. Successfully weaned from the ventilator, he joked with his team and asked questions about his care. His therapists incorporated his love of football into sessions. They also treated him to fun patient outings with recreation therapy, like a trip to the movies to see the latest Top Gun movie. He also used the interactive driving simulator, with the goal of one day getting his driver’s license and participating in weekly aquatic therapy sessions.

“Freddy is a teenage boy, and he deserves to do everything a normal teenage boy does,” Pauley said. “When he gets home, he’s going to go to the movie with his friends and learn to drive. We want him to be able to do these things safely and easily, so we practice here.”

After three months of hard work at Madonna, Freddy celebrated with his care team before returning home to Sioux City, Iowa. He earned a Madonna Spirit Award for his can-do attitude.

“My favorite part of working with him was his smile,” Williams said. “Even on a bad day, he smiled. It was such a joy to work with Freddy, and it was so rewarding.”

Through the diligent work of his care team, Freddy returned home completely independent. He can manage his long-term respiratory medications and his home Bi-pap machine. When asked how he felt about his progress, he kept it short and sweet. “It feels good,” he said.

After surviving brain surgery at just 7 years old, Norris Payton, Jr. and his mom Cassie Cudney were unsure whether he'd be able to regain the spe...

Kyah Matthews was diagnosed with acute transverse myelitis at the young age of six, starting a journey of recovery that brought her to Madonna's Linco...