As a father, it was the worst day Dave Casper could imagine. He got a call that son Drew was involved in a wreck at Heartland Motor Sports in Topeka, Kansas. His outlook was grim.

“We didn’t get a lot of messages that gave us a lot of hope,” Dave said. “He was supposed to go for a joy ride and ended up in that shape was pretty traumatic and it made for a pretty tough experience.”

Drew Casper is a car enthusiast. At the young age of 22, the Kansas State University senior had just been named curator of a luxury car museum, Midwest Dream Car Collection. Drew was invited to ride along in several high-powered race cars at the race track in Topeka on March 31.

First up was a ride in a Porsche GT3 RS – it went well. The second ride, in a Corvette ZR1, is where things took a dangerous tu 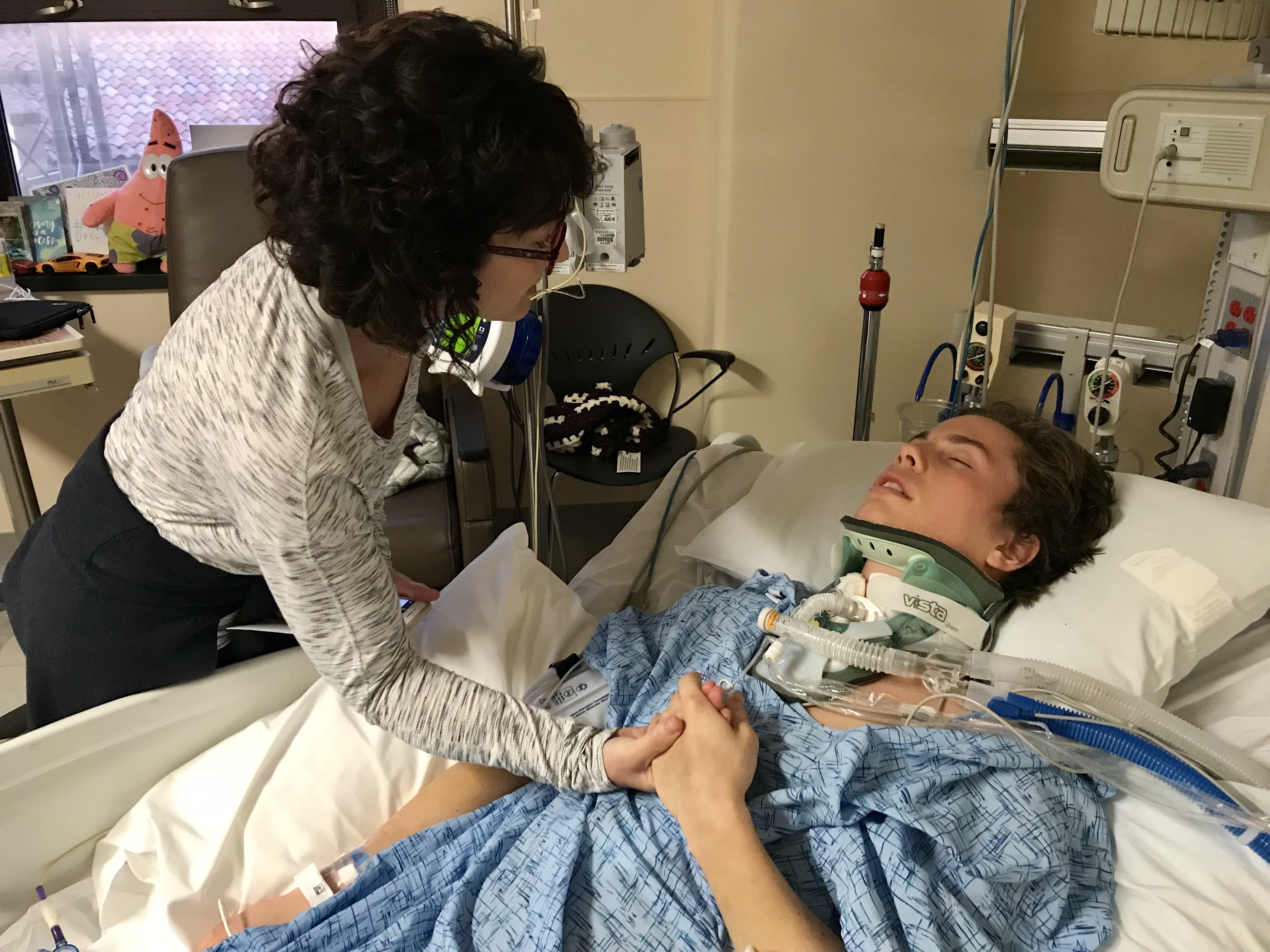 The driver lost control and smashed into a concrete barrier.

He shattered his C1 vertebra, the small bone that connects the brain and spinal cord, into four pieces. His C2 vertebra was cracked. He broke three ribs and his clavicle, dislocated his shoulder, suffered a traumatic brain injury (TBI), and a brain bleed.

At Stormont Vail, he underwent a dangerous surgery to reconnect his head and spinal cord. His family was told his survival rate was roughly 15 percent.

It wasn’t until he arrived at Madonna Rehabilitation Hospitals – Lincoln Campus that Drew’s memory gradually resurfaced.

“The first thing I remember was waking up one day in my room, which I think was room 116,” Drew said. “I remember [my dad] was playing some movie for me on the laptop, and I watched the movie the whole way through.”

Dave, though, remembers every minute, from the moment he was told Drew might not regain mobility, to the first time he saw his son’s hand flinch. There was still hope.

“When Drew arrived at Madonna I believe the only thing that was really working was his left arm,” Dave recalled. “He could move his left arm, and open his eyes and maybe look like he wanted to say something but really couldn’t.”

Dave spent almost every day by his son’s side at Madonna's acute rehabilitation unit. A ventilator and tracheotomy tube helped him breathe. After weaning and making progress, he graduated to Madonna’s Rehabilitation Day Program – a specialized outpatient program. 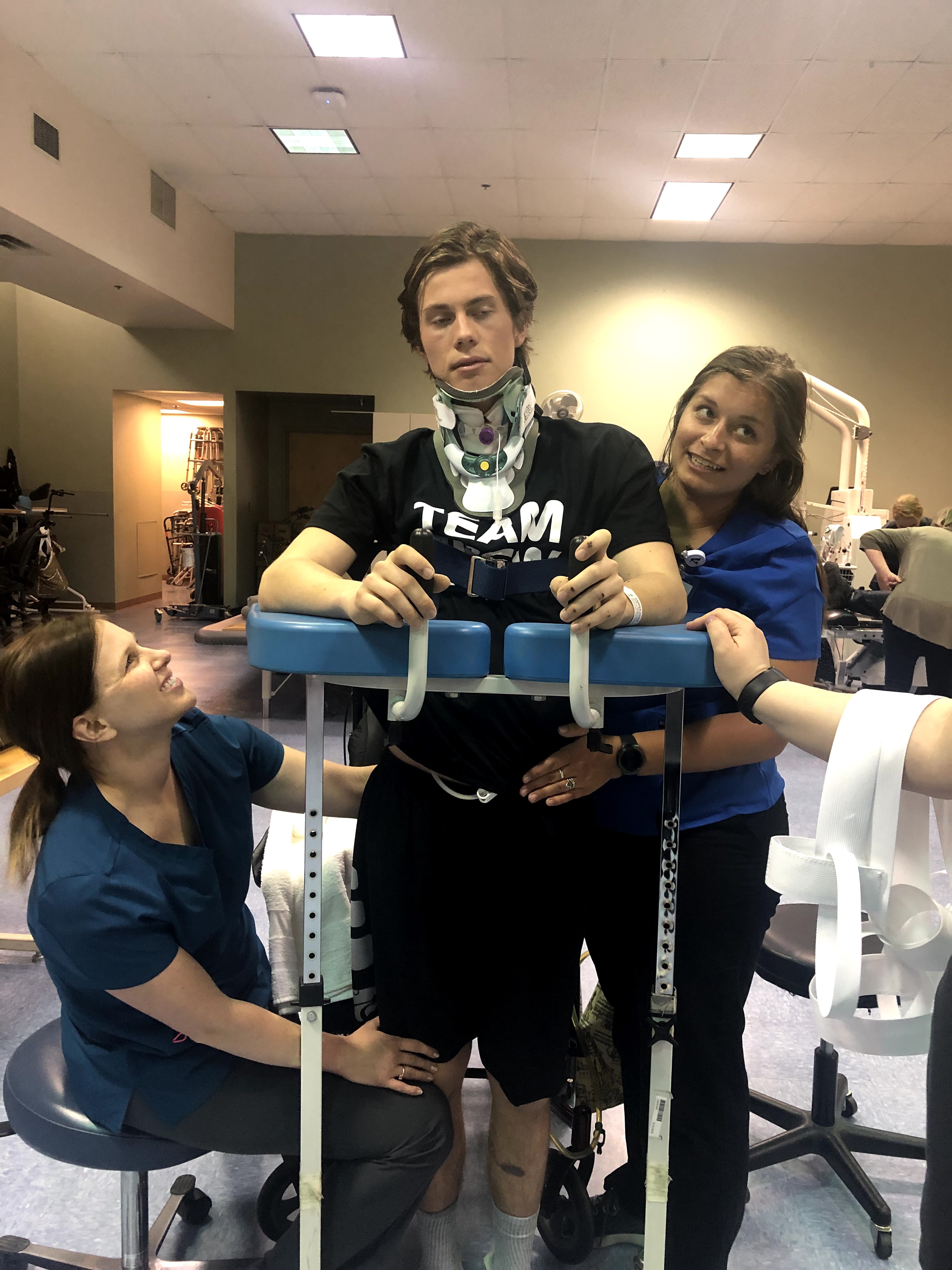 Each day, Drew worked with a team of therapists and nurses on intensive rehabilitation to regain cognitive function, speech, and motor skills. The young man who was given little hope started bouncing back.

“Maybe three weeks into his stay [at Madonna] he was speaking a single word,” Dave said. “I went home for two days, and then came back two days later. When I walked into the room, he said ‘Hey dad how’s it going?’ Holy cow he was speaking in complete sentences! It was pretty remarkable considering where he was just 24 hours prior.”

Drew’s support was his motivation. Not just his parents and his clinical team, but his friends that would make the two-hour drive from Manhattan, Kansas to Lincoln, Nebraska.

“I stayed upbeat because I had so much support behind me,” Drew said. “My friends would come every week and I was happy to see them. My parents were here every day. I am thankful for all the help I had along the way and all the therapists and all the people I got to see, the nurses I got to see. They kept me pretty positive.”

That positivity generated even more milestones. Drew took his first steps inside Madonna’s therapy gym just three weeks after his accident. By the end of his three month rehab stay, the college student who was told he may never be able to stand up again was running down the hallway and doing push-ups while working with his therapists in the Rehab Day Program. He also relearned how to drive with the help of Madonna’s specialized driving simulator.

“Everybody here at Madonna had seen this kind of injury before and had dealt with his issues many times,” Dave said, smiling at the fact that his son had defied all odds. “Everybody knew what he needed and where he was going to go and what he required to get better. It was amazing to me how everybody worked as a team to make that happen.”

Thanks to that teamwork, Drew walked out of Madonna independently. He is enrolled back in classes at Kansas St 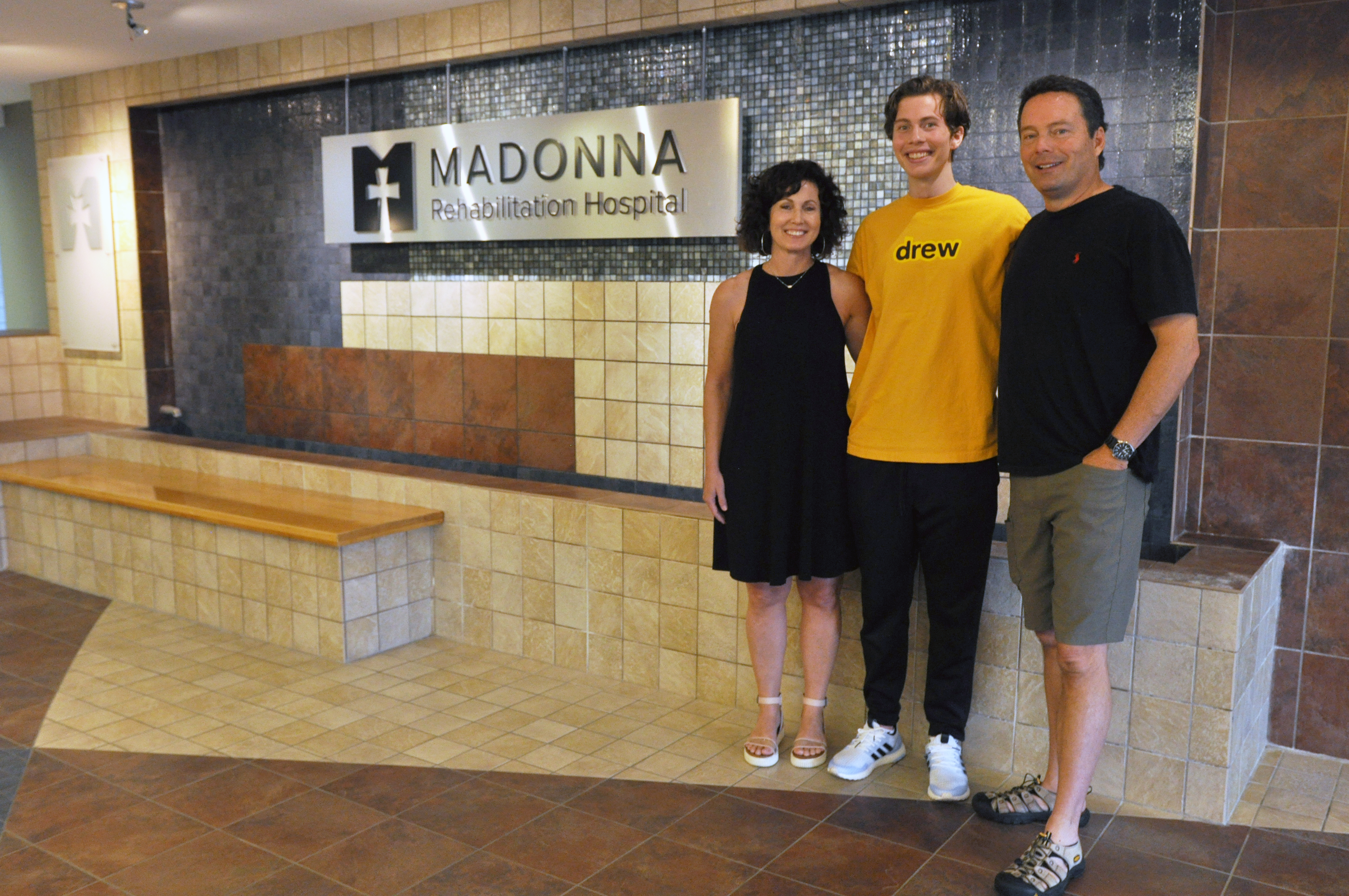 ate University and has 12 credits to finish before graduating. He’s returned to his love of golf and to his role as curator of the Midwest Dream Car Collection in Manhattan, Kansas.

Drew recently appeared on the Kansas City-based Driven Radio Show with Brett Hatfield. You can listen to that interview here.

KANSAS TEEN A WALKING TESTAMENT TO HOPE AND HEALING

Caleb Tobias of Clearwater, Kansas, has defied all the odds stacked against him after a devastating car crash on March 6. The teenager arrived at Mado...

THE POWER OF A POET

Noah Weaver has long expressed the way he feels through poetry and lyrics. But then a car accident changed the 26-year-old’s life in an instant. No...