Picking up the pieces of a shattered life takes grit and resilience. Those traits, along with his steadfast faith, supportive family and love of music, are helping Caleb Tobias reclaim his life.

On March 6, 2019, the routine morning commute to school in Clearwater, Kansas, took a near fatal turn for Caleb. A Ford SUV ran a stop sign, slamming into the family sedan he was riding in with his mom, sister and a foreign exchange student. Caleb, then 13 years old, and his mother were critically injured. En route to the hospital, Caleb lost consciousness in the ambulance and emergency personnel quickly resuscitated him. 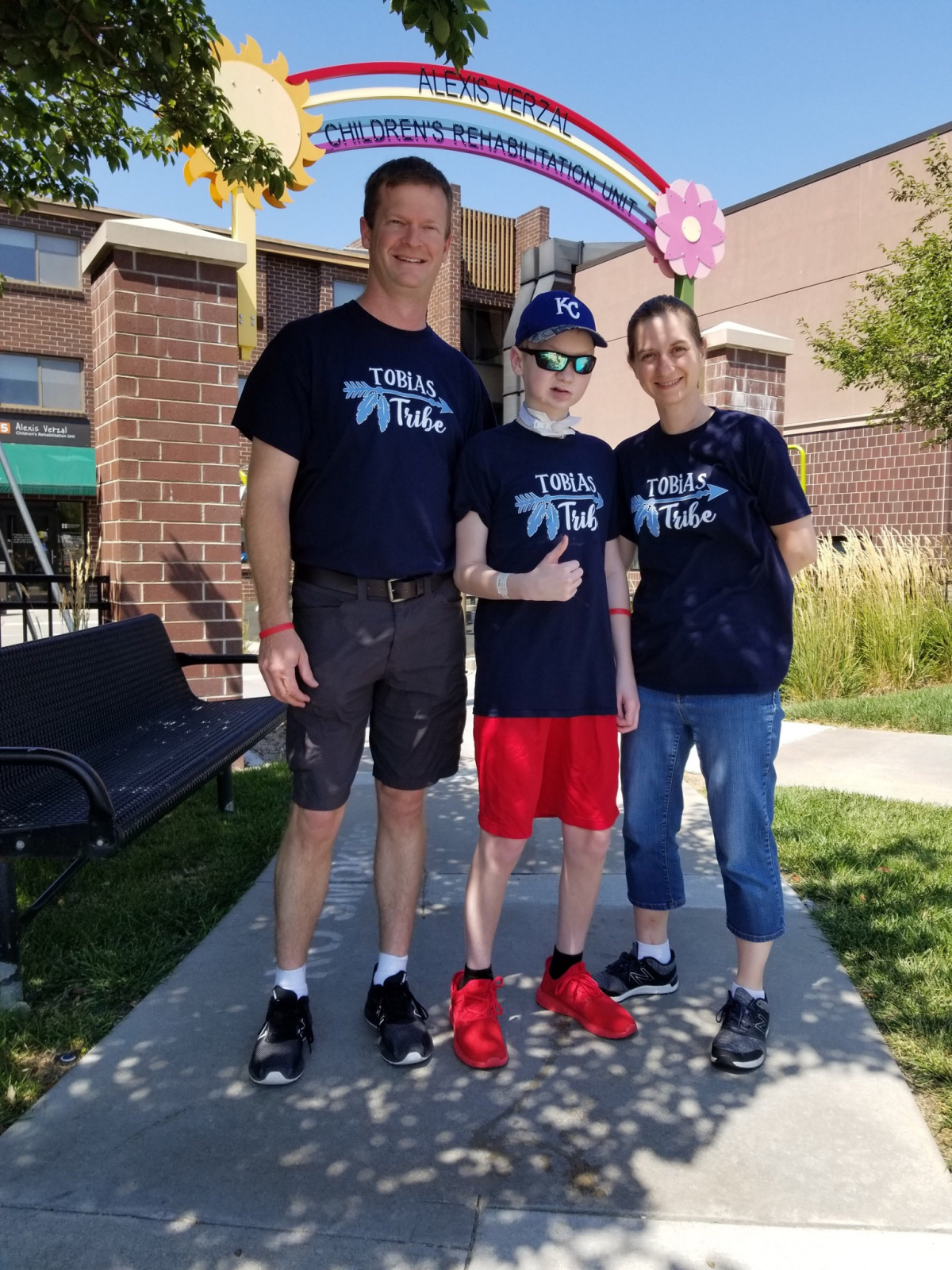 The trauma team at Wesley Medical Center in Wichita, Kansas, stabilized Caleb, but his chances of survival were bleak. The impact of the crash shattered Caleb’s body. He suffered a severe traumatic brain injury. In addition to the brain trauma, the teen sustained massive facial injuries and pelvic fractures. He was comatose, dependent on a ventilator and feeding tube, and fighting for his life. Doctors doubted Caleb would ever recover or have a meaningful life. Uplifted by an army of prayer warriors, he’d soon prove them wrong.

Following eight blood transfusions and surgeries, Caleb arrived at the pediatric unit of Madonna’s Lincoln Campus on May 15 and the first of many milestones unfolded.  The young man surprised everyone by greeting his night shift nurse with some of his first words “Hi Lisa!”

Despite losing 25 percent of his body weight and his vision significantly impaired, Caleb’s innate determination amazed everyone. Shootin

g a basketball from his wheelchair, stacking Legos and blowing a whistle were tiny triumphs celebrated with his Madonna team. Caleb’s brain was healing and signs of his personality and humor slowly emerged. When his father, Aaron, asked Caleb to cheer on the Kansas University basketball team, the young fan didn’t hesitate in his response: “Rock Chalk Jayhawk!”

June 3 was a turning point when Caleb stood for the first time. Becoming weight-bearing was a monumental step toward mobility. A few days later, on his first attempt, Caleb walked 110 feet.

His mom, Kim, healing from her own injuries and multiple surgeries, also began therapy at Madonna.  The mother and son kept encouraging each other toward their shared goal to return home. And the growing supporters on Caleb’s Caring Bridge page kept praying.

Caleb’s singing inspired his team as he belted out lyrics while rebuilding his gait and balance on specialized technology, including the Lokomat, ICARE and Proprio. “By the time I finished a song, I was usually done or halfway there,” he said, smiling.

After three months and 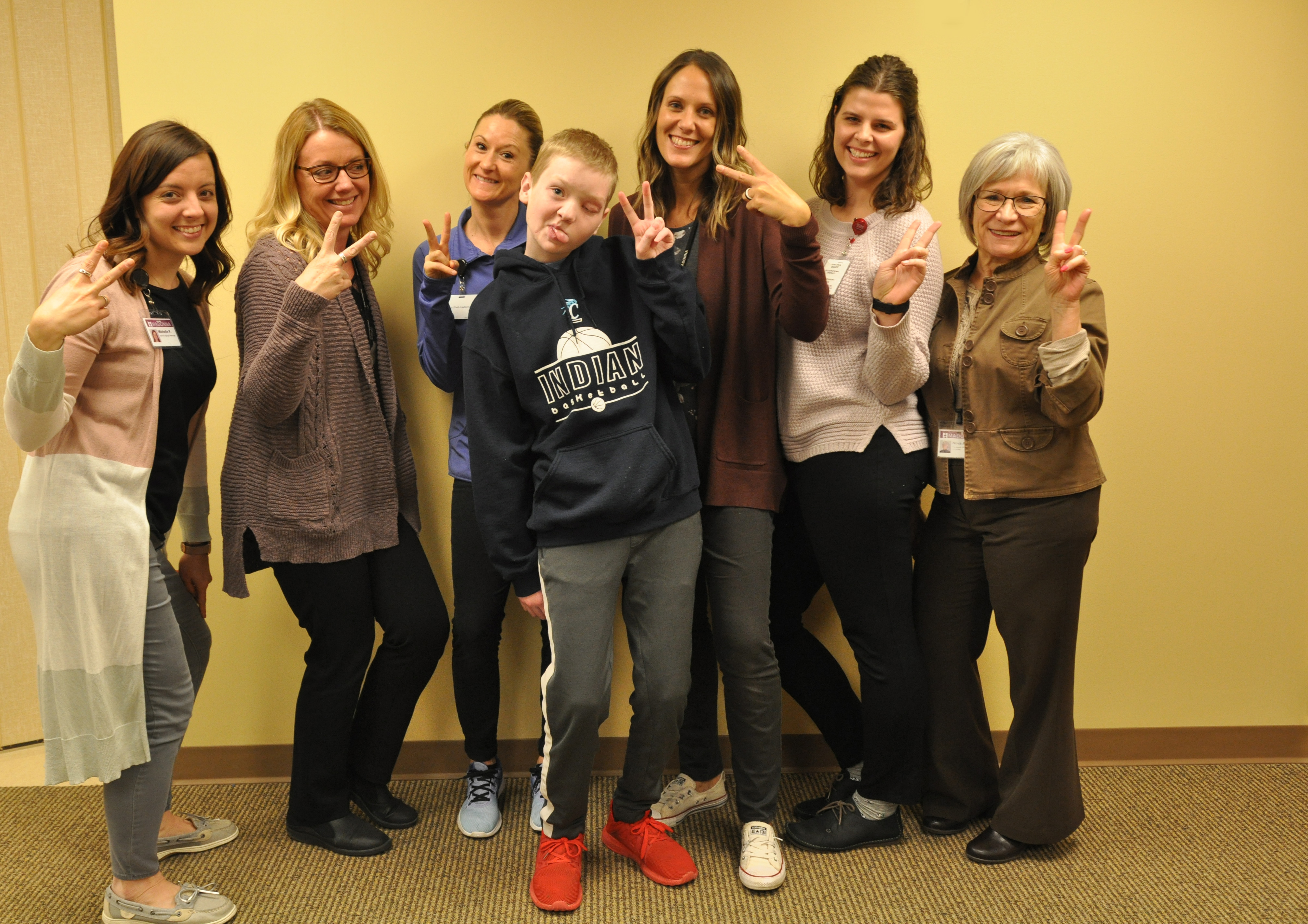 enduring yet another surgery, Caleb began the outpatient Rehabilitation Day Program. Free of his breathing tube, aquatic therapy became an exciting addition to his daily regimen of occupational, physical and speech sessions. “Just being in water makes me feel so good,” Caleb said.  Michelle Foley, speech-language therapist, introduced VitalStim, an electronic stimulation therapy, to strengthen Caleb’s facial muscles as he relearned to swallow and use a straw. Teachers in Madonna’s onsite school kept the teen on track with his middle school peers. Performing an energetic line dance to the “Cupid Shuffle” with his mom and Angie Gerner, occupational therapy assistant, showcased how far Caleb had progressed physically and mentally.

On Nov. 12, eight months post-accident and back home in Clearwater, Caleb turned 14 years old. He dressed himself, ate breakfast and on his first day back to school, the boy who wasn’t supposed to live, stood confidently, smiling and playing the drums as his band played “Happy Birthday” in his honor.

THE POWER OF A POET

Noah Weaver has long expressed the way he feels through poetry and lyrics. But then a car accident changed the 26-year-old’s life in an instant. No...