Landon Beck and his wife, Lydia Meece, have been putting in work in the gym for years. The pair are members of their local CrossFit gym in Des Moines, Iowa. Meece credits every squat, every rep and every pushup with saving Landon’s life in a car accident in May. The 28-year-old was visiting family in southwest Missouri, planning to celebrate his brother’s graduation, when he was T-boned by another vehicle.

“I didn’t know how bad it was,” Landon admitted.

“He was in a terrible accident and didn’t have one broken bone,” Lydia said. “He had a scratch on his thumb, and this was the only other injury from the accident. It’s a real Jackie Chan move. He went through some traumas that he would not survive if he hadn’t been doing all his own stunts, right?”

Landon survived the accident, but doctors at Mercy Hospital in Springfield, Missouri, were unsure what his future would look like. He came to Madonna Rehabilitation Hospitals in a vegetative, or minimally conscious, state. But, Lydia never stopped believing he would emerge from his severe brain injury.

Brooke Murtaugh, Madonna’s Brain Injury Program Manager, worked with Landon’s family to bring him to Madonna. She knew Madonna’s Disorders of Consciousness program would be the best place for him to recover.

“After someone has a catastrophic brain injury such as Landon’s, it’s really an unknown that early on exactly what the outcome is going to look like and how that patient is going to progress.” Murtaugh said. “So we are talking to the family and helping manage those expectations, and letting them know that it’s ok to have the unknowns because we’re going to do everything we can to help.”

Murtaugh says coming to Madonna would be different for patients with disorders of consciousness compared to going to a skilled nursing facility or a long-term care facility right from an acute care trauma center. The reason: Madonna brain injury specialists undergo several years of specialty training and have researched the evidence-based practice guidelines and published competency recommendations for what programs should be doing with this patient population.

“Implementing that evidence-based practice and having a much more wide-range clinical understanding of this patient population, not only trajectory of recoveries, but standardized assessments, how to look at prognosis, medical management, every facet of rehabilitating this person, promotes recovery and the overall outcome,” Murtaugh said.

With help from Madonna’s experts in disorders of consciousness and a specialized brain injury rehabilitation program, Landon slowly moved through the complete continuum of care. He began his journey in the specialty hospital, where the focus is on managing medical conditions and ensuring medical stability during therapy sessions. He then moved to the acute rehabilitation unit. Each step of the way, he increased his tolerance for daily therapy and his level of consciousness, from a minimally conscious vegetative state to full consciousness and awareness

“I really felt like in the ICU they didn’t believe me and they didn’t think this was possible,” Lydia said. “But I did, and Madonna did. They just cheered us along every step of the way instead of saying, ‘Well, he might not.’ I think we become what we’re expected to. So, when people treat you like you’re not going to get better, then you don’t. And everyone deserves to be treated like we have here.”

Defying the expectations of his intensive care unit team, Landon made incredible gains. His wife and care team saw the spark in his eye, and knew he was willing to work hard.

When recovering from a severe brain injury, small victories add up. For Landon, the first victory was holding his head up on his own. From there, he progressed to standing and walking, with the help of the Lokomat robotic gait trainer. Being a young, healthy man sped up his recovery, as his leg muscles were ready to work. He also utilized the FES electrical stimulation bike and ArmeoSpring to improve the strength and coordination in his arms.

“Having access to this high-tech rehab equipment has been able to bridge the gap from when he wasn’t able to walk or stand on his own, to where he can,” Lydia said. “I’m glad it feels like we’re almost to the point where we don’t need some of those technologies anymore, but they’re there for the in-between.”

A strong body and a strong sense of humor propelled Landon’s journey even further. A sassy comment prompted a sassy reaction during a session with the standing walker.

“I had the mirror, and I was being a little bit of a smart aleck because they said move it closer, and I said, ‘Why don’t you come over here?’ And you did,” Lydia said.

Lydia, who happens to be a resident physician, cheered on her husband of six years every step of the way.

“I think she was a huge part of his recovery because her medical background definitely helped but also a part of that was love,” Morgan Shobe, an occupational therapy assistant, said. “It was clear she always wanted the best for him.”

After months in the hospital, Landon and Lydia got a chance to get back into the community and simulate what reintegration looks like with a trip to Omaha’s Henry Doorly Zoo and Aquarium. The dim lighting and level ground of the aquarium offered a perfect space for recreation therapy and caregiver training. Landon practiced walking with a walker while penguins swam alongside him and stingrays glided above his head, Lydia staying nearby for support. 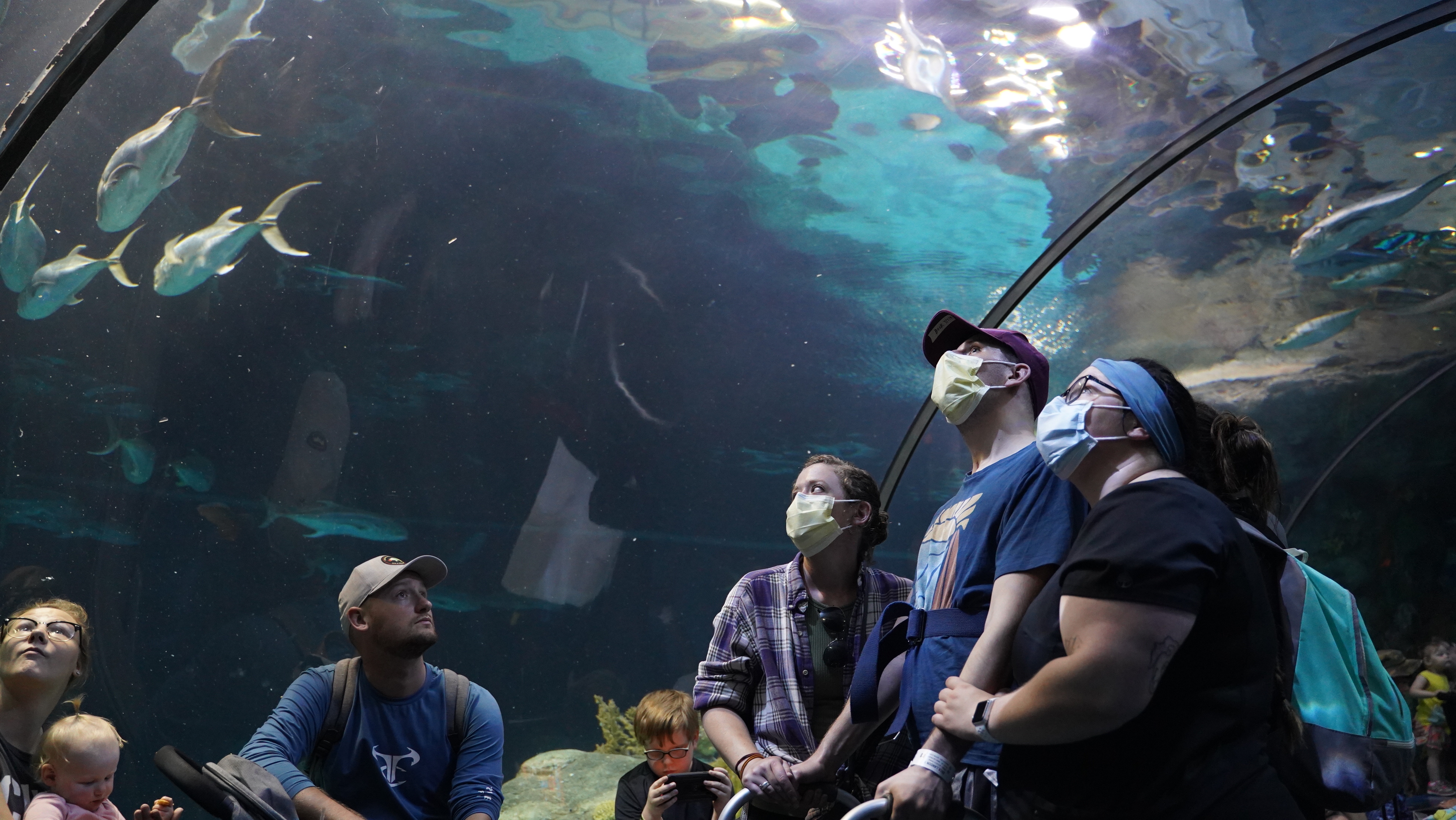 “We called it Landon and Lydia’s first date, so yes, we were all third-wheeling on this date,” Shobe joked. “It was just a great opportunity for them to get outside the hospital walls and remember what it’s like to feel normal again.”

As Landon returns home to Iowa, his care team says they’re excited for the possibilities of what’s to come for him.

“With severe brain injuries, it’s not recovery of weeks or months, this is recovery that’s going to take years,” Murtaugh said. It may be two, three, five years to reach that ultimate outcome patients can achieve because that brain has been so severely injured. What can give us some idea of where that recovery trajectory will continue to move once they leave Madonna is where they started when they came to Madonna versus where they were functioning when they left. I would think sky’s the limit for as well as he did when he was with us.”

While the sky’s the limit, Landon says he’s looking forward to just one thing.

“I want to skip ahead, I’m not patient, I want him home,” Lydia said. “But I am grateful that I feel like everyone we’ve worked with has given us that opportunity because coming home, what that means to me is not just him being there, being in my house and sleeping in our bed and cuddling with our dogs. It does mean a whole life. I’m excited for our whole lives together. Every bit of it.”

Diana Schneider looks back on 17 months filled with uncertainty and counts her blessings. For the single mother of three, the pandemic has given her t...