Emily Motycka works 35,000 feet in the air. She’s seen just about everything during her seven years as a flight attendant, but in August, just as she was finishing her work day in Seattle, a stroke caught her off guard.

“I don’t remember anything about that day, but I’ve been told I was saying I didn’t feel good, so a friend took me to the bathroom and I just started getting sick,” Emily said. “Thankfully, he recognized the warning signs of a stroke and called 911.”

Waking up in a hospital bed was confusing for Emily. She doesn’t remember much from her time in the ICU. The healthy, active 49-year-old spent six weeks in a hospital in Seattle, before she was medically stable enough to return home to Omaha. She and her family knew she needed to come to Madonna Rehabilitation Hospitals, where physicians, nurses and therapists specialize in stroke recovery.

“I try not to think about it, being a young stroke survivor,” Emily said. “I’m glad I am, because it’s better to be a survivor, but it’s a lot. I just want to get back to where I was before it happened.”

When Emily arrived at Madonna in September, she was unable to walk and struggled with her vision. Her therapists say her attention span was roughly five minutes, and her memory was not reliable.

“In the beginning, she had a lot of difficulty maintaining visual fixation attention for greater than 2-3 seconds,” Aubrey Janousek, a Madonna occupational therapist, said. “She was very easily distracted when tracking a target through the left side of space, and she was unable to coordinate her eye movements to be able to accurately read numbers across a page.”

As she progressed, therapy began to challenge her with higher level cognitive skills and activities. Emily’s can-do attitude and strong desire to return to her life role as an employee, friend and mother pushed her to succeed during her time at Madonna. Her goal was to regain her full independence.

“As a mom and flight attendant, Emily was used to multitasking and operating at a very high cognitive level,” Sarah Maul, a Madonna speech-language pathologist, said. “This meant, that Emily was very motivated to participate in any sort of cognitive therapy to get her back to those roles. At Madonna, Emily worked on alternating attention tasks, delayed recall, functional problem-solving for the home, as well as motivating activities, like planning future vacations.”

By customizing these activities and her plan of care to Emily’s lifestyle and preferences, Emily remained motivated and confident in therapy sessions. With help from daily vision group activities and specialized technology like the BITS integrated technology system touchscreen, she saw tangible results, which only encouraged her more. Emily’s cognition improved and she learned strategies to adapt to her change in eyesight. 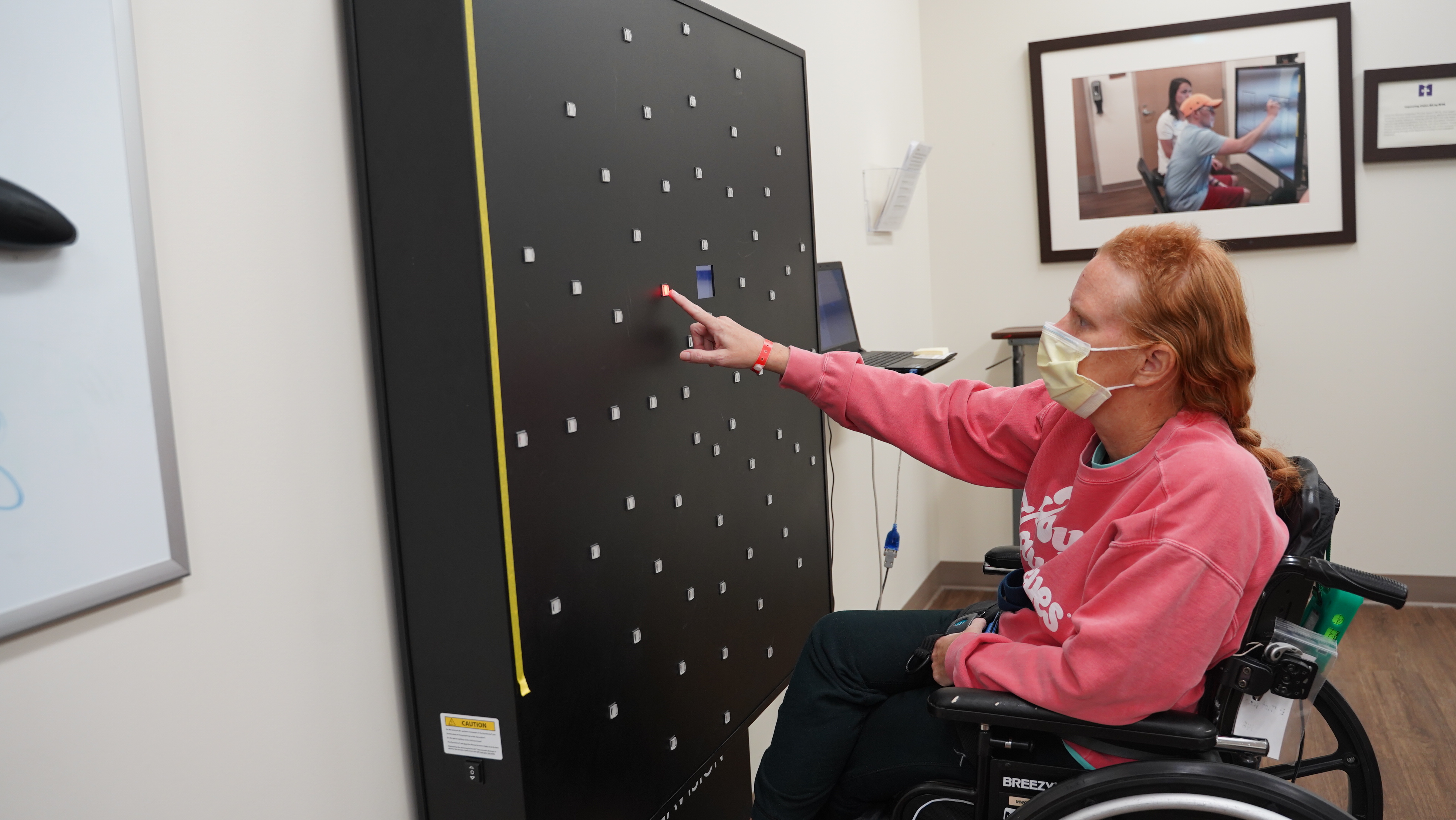 “Per the Neuro-Optometrist’s recommendation, we utilized base left yoked prisms to reflexively shift her left peripheral visual field, which in turn, increased her awareness to her left side,” Janousek said. “Emily also responded very well to the use of visual anchors on her left side cueing her to locate a piece of tape that served as the end range border. Once Emily was able to locate the tape, she could be confident in knowing she had scanned as far left as she needed to.”

Emily also regained strength and coordination in her leg muscles during physical and occupational therapy sessions, giving her more independence. She navigated using a walker, then walking on her own with someone nearby for balance.

“I see a lot of improvements in myself, and I know I’m doing better with everything,” she said. “I mean, nothing is easy. It’s hard work. The therapists don’t let me sit around and eat bonbons! I can tell that I don’t stumble as much, and my balance is much better.”

The dedication of her care team and her support system helped set Emily up for success. Her friends and family were by her side daily during therapy sessions, keeping other loved ones up-to-date via a Facebook group called, “Emily Motycka Fan Club.”

“Her friends helped continue to motivate her to do the best she could each day to help her regain as much independence as possible,” Janousek said. “By being able to frequently socialize and laugh with her friends, she was able to maintain a positive attitude throughout her recovery.” 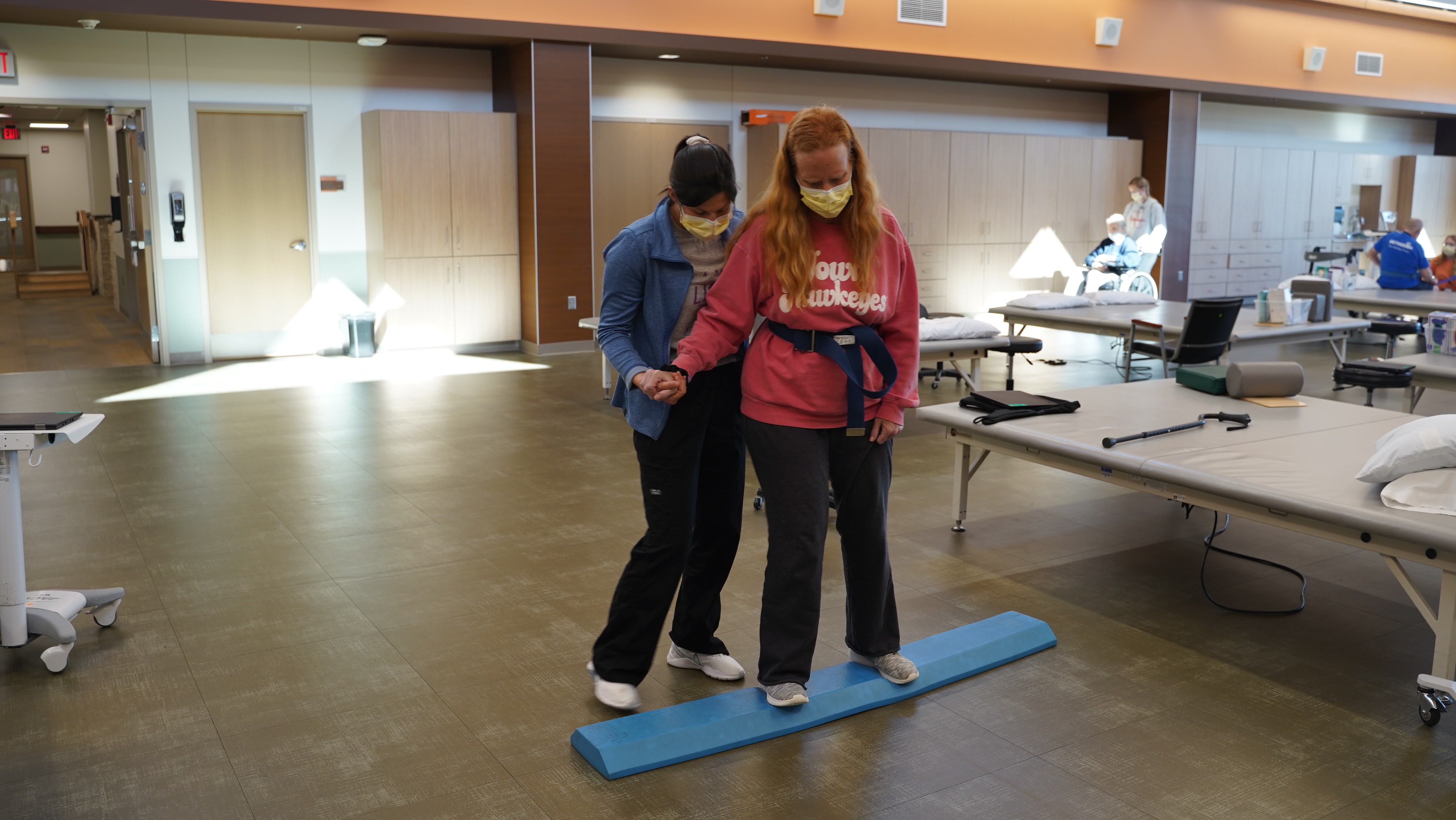 Maul agrees, adding that Emily wasn’t the only one working hard.

“She and her family put in the work, and it was evident that her progress did not start and end in the treatment session because it was carried over by her loved ones,” Maul said.

Emily considers herself a super Disney fan, taking several trips a year with friends to Disneyworld in Florida. Though she practiced planning vacations in therapy, they don’t have their next trip on the books just yet. Confident that she can plan and execute an itinerary, her hope is to take a trip in the next few months to commemorate everything she’s been through on her recovery journey.

“I tell people, they have to do the work and do what the doctors and therapists are telling you, and you’ll get there,” Emily said. “I’m ready to celebrate all this hard work.”

Her care team knows Emily’s progress will continue for years to come.

“Let me end with a very cheesy line. For Emily, the sky is the limit – literally!” Maul said.

Rob Meader is a 2017 Goal Award winner. We caught up with him six years after suffering a major stroke and Rob continues to be independent and credi...