For as long as she can remember, music has been a large part of Geslin Alexander’s life. She loves the classic, smooth sounds of Etta James and Ella Fitzgerald. Growing up, she’d sing gospel and R&B, but her favorite was always jazz.

“I’ve been doing it since I was very, very young, and my parents always encouraged me to keep singing,” Geslin said.

After a nearly five-month stay in two different acute care hospitals, Geslin’s voice didn’t sound like she wanted it to. When she arrived at Madonna, her entire body was deconditioned from a lengthy battle with several different medical conditions. She spent weeks on a ventilator and underwent multiple surgeries, including amputations on both feet. She was forced to relearn how to walk, talk and even breathe on her own.

“She was a very complex patient,” said Dr. Nikita Wagle, who helped coordinate Geslin’s medical care at Madonna. “She had an aortic valve repaired about 10 years ago and had to have two valves replaced in early January of this year and following that, she had an acute kidney injury requiring dialysis initiation with nephrology. During her hospital stay, she had a cardiac arrest which worsened her heart failure. She also had some encephalopathy, the acute kidney injury that required the initiation of dialysis. Later on, she was found to have disseminated TB infection that had spread in her lungs as well as in her skull.”

Dr. Wagle said for someone who is only 24, Geslin has had to overcome more obstacles than most people face in their entire life. But her positivity and her clear goals made her rehabilitation at Madonna successful. Geslin was determined to walk out of the hospital, and she was determined to sing again. With help from a physician-led care team, Geslin was able to manage all of her medical conditions while returning to daily activities that made her feel fulfilled.

“She wanted to get back to her normal life, so that was just her biggest motivator,” said Michala Remund, a physical therapist. “She was always up for a challenge. She never gave up, even though she knew this was hard and she was huffing and puffing by the end of the session.”

Using specialized technology, like the Proprio 4000 tilt machine, Geslin worked to improve her balance, stamina and coordination so she could walk again. Because she’ll be in special walking boots for a few months, Remund wanted to make sure she could handle new or unfamiliar situations. She also wanted to help Geslin prepare to walk down the aisle to her fiancé in June 2023.

“I wanted to have her learn to navigate an unsteady surface and use her other muscles and her other balance strategies like her hips, because that will be important for her when she starts moving in the community, going over sidewalks and grass,” Remund said. “I am very hopeful that with continued physical therapy and speaking with a prosthetist, they can work on getting her some insoles in her shoes and she’ll be able to walk down the aisle to Hansen next year, and hopefully she’ll be able to wear whatever shoes she wants and she’ll be dancing on the floor!” 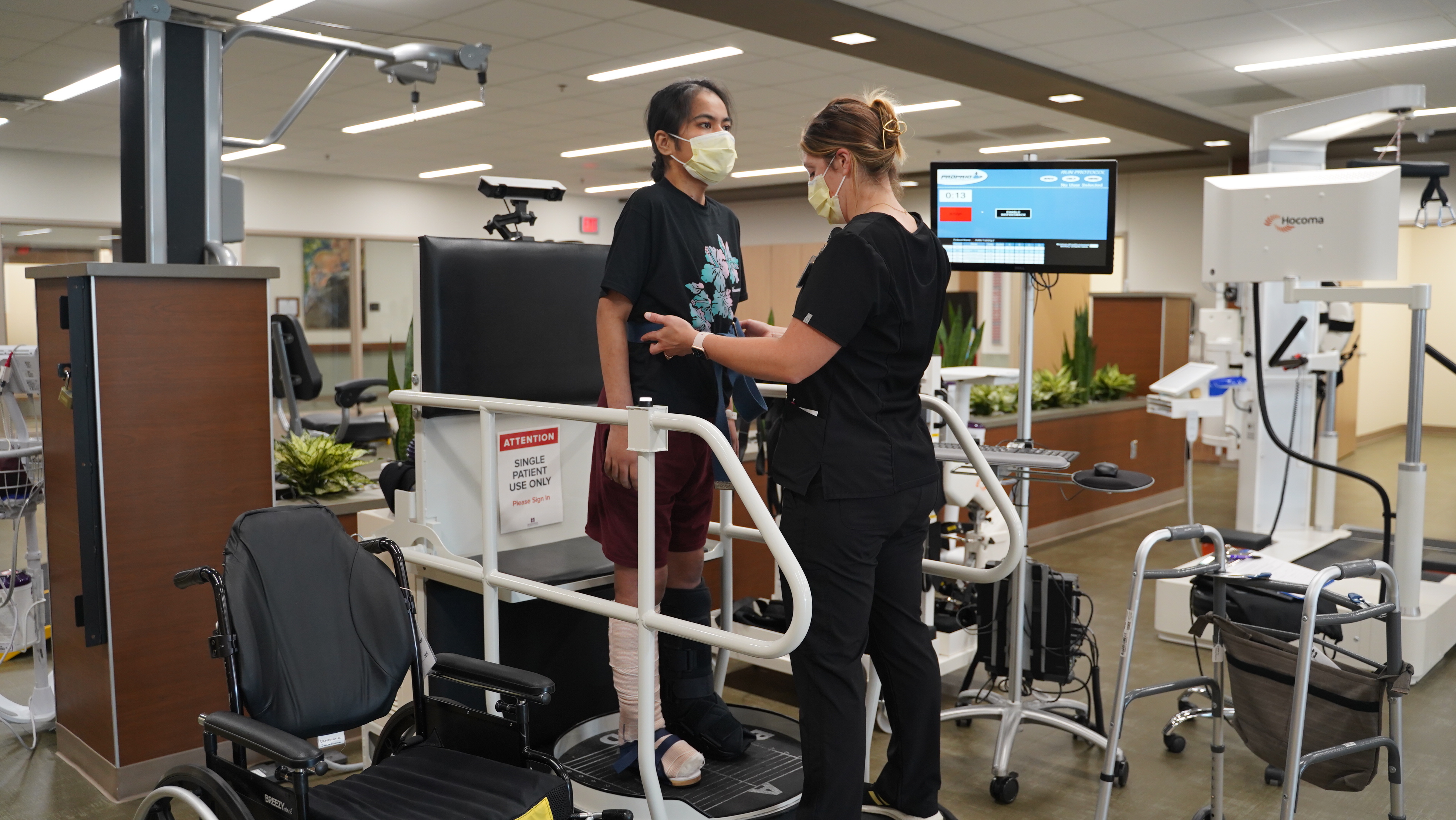 The first steps Geslin took at Madonna were emotional.

“Even though I’m holding onto the railing, I’m walking,” she said. “I could never even stand when I got here. I really needed help. Eventually I’ll get there without the railing. I’m really proud of myself.”

Another step in Geslin’s recovery was returning to her first love: singing. After as much trauma as her body had been through in terms of surgeries and a ventilator, her voice didn’t sound exactly like she remembered, and she struggled with what she called the loss of part of her identity. Her speech-language pathologist, Sarah Maul, found little ways to improve both her sound and her self-confidence.

“We took an exercise focus approach, and we did some semi-occluded vocal tract exercises and also some general vowel shaping, teaching her how to bring that voice forward so she’s not swallowing her own power up and causing more damage to the structures that she cares so much about,” Maul said. “Singing was actually a really good vessel for us to practice those skills in a motivating activity. It was so exciting not only to see her do the activity, but also her reaction to herself doing the activity. You see this reinstatement of confidence and hope in her eyes and in her face that there is going to be a time where she can do this again the way she used to. It’s not a forever point of her having difficulty with her voice. There is a future to this.”

Through weeks of work, Geslin finally felt ready to sit down at the piano in Madonna’s chapel and sing some Etta James.

“Just because something is difficult doesn’t mean we don’t try and doesn’t mean we don’t work on it,” Maul said. “The really important thing is that we can’t shy away from singing, and I kept telling her by not using your voice, by not putting these skills into practice, we’re not allowing the muscles to gain strength and go back to that activity that you were doing before.”

The familiar feeling of the piano keys made Geslin more comfortable.

“Being able to sing again made me feel normal,” she said. “It was bringing back the old days.”

To celebrate her newfound sense of normalcy, and continue to put her relearned skills into practice, Maul took Geslin on a patient outing to Omaha’s Village Pointe shopping mall.

“There’s a lot of cognitive functions that go into that concept of being ‘normal’, doing normal things out in the community, “Maul said. “Getting her out there was a really good step to show her how she can use these cognitive strategies and processing strategies to get her back out in the world.”

Geslin said she felt a mix of nerves and excitement as she walked out Madonna’s doors to return home to Sioux City. Her life will look slightly different with the addition of new medications and her special walking boots, but she feels prepared to navigate all the unknowns. She will do it with a smile on her face and a smooth jazz song in her heart.

MOM OF 3 LEARNS ABC’S OF REHABILITATION

Just weeks after delivering her third child, Amber Becker woke up to numbness on her left side. The problem didn't go away, and after an emergency...

As a veteran Navy hospital corpsman, Rachel Matthews has seen her fair share of others battling with health issues. But now the 65-year-old resident o...