Former patient and 2008 GOAL Award recipient Jeromie Meyer is a founding member of UNO’s wheelchair basketball team. He’s excelled at the sport after recovering from a spinal cord injury at age nine.

Jeromie Meyer recently finished an anatomy midterm at the University of Nebraska at Omaha. The student athlete also makes time for wheelchair basketball practice in between a 13-hour course load. At 20, he’s quickly becoming known for his wheelchair basketball skills both on campus and internationally.

Jeromie led the USA team to victory in January and was the top scorer with 15 points at the 2017 International Wheelchair Basketball Federation Under 23 Men’s American Zone Championship tournament in Argentina. Jeromie earned a spot on the elite 12-member team after spending hours in the gym perfecting his technique and skills.

“I am honored to be getting recognized as being an up-and-coming player. It’s nice to see my hard work paying off,” said Jeromie.

Jeromie’s passion and drive for wheelchair basketball developed in 2007 after he suffered an incomplete T10 spinal cord injury. He and his older sister, Bailee, were riding bikes near their home in Woodbine, Iowa, when he was struck by a drunk driver. While a life-changing event, Jeromie has never let the accident define his future.

“I always felt there was no point in crying over something I can’t change. This is the hand I got dealt, I have to play it,” said Jeromie.

When deciding on rehabilitation for Jeromie, hIs parents chose Madonna for the energetic, curious 9-year-old. It was during a recreational outing that he was introduced to the possibilities of wheelchair sports through Madonna’s Adaptive Sports and Recreation Program. He was immediately interested.

“I’ll never forget when we took him to Madonna ProActive for the first time to play wheelchair basketball,” said Kristin Luethke, recreation therapist. “He was so excited that he could participate in sports. He and his dad played a game of ‘HORSE.’”

Kristin says Jeromie’s determination and great attitude helped him go on to excel on the basketball court with the Red Dawgs wheelchair basketball team. In 2008 he helped take the Junior Prep National Wheelchair Basketball championship title. That same year he was named a Madonna Chairman’s GOAL Award recipient for his successful recovery both on and off the court.

As Jeromie grew so did his passion for the sport. In high school he added to his hardware by winning two national championships in the Varsity division. Coach William Kult was there from beginning to help develop his skills. William was instrumental in starting the UNO wheelchair basketball team and he asked Jeromie to be one of the founding members.

“We’re grateful Jeromie took a chance on us by deciding to come to UNO and play. He’s served as a leader and mentor to the other players,” said William.

The wheelchair basketball program is still in its infancy and didn’t have a winning season. But William isn’t worried, saying players have grown as a team and developed their skills. He also says recruits are taking notice that UNO is up-and-coming for the sport.

Looking to the future, Jeromie stays grounded, saying medals don’t pay bills; degrees do. He’s pursuing a degree as a recreation therapist and after college, plans to try out for the USA Senior Men’s Wheelchair Basketball team.

“As I look back, I feel like Madonna helped me figure out my game plan which I’m very thankful for,” said Jeromie.

In the news: Jeromie Meyer is a Maverick now, but could be a Paralympian with Team USA basketball next (Omaha World Herald) 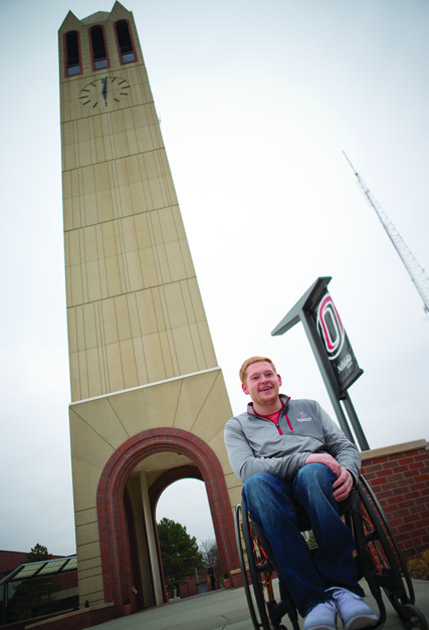 Jeromie is also a success off the court. At 20, he’s pursuing his goal of obtaining a degree in recreation therapy before trying out for the USA Senior Men’s Wheelchair Basketball Team.