Madonna’s Adaptive Sports and Recreation program has not only greatly impacted our patients, it’s also connected more members of our community this past year. By exploring a wide variety of activities offered during recreational outings, patients learn what sports they have an affinity for and begin to incorporate those activities into their daily lifestyle. Despite whatever limitations one might have, the experts at Madonna are able to show individuals there is always a new possibility.

Several adaptive sports had a very successful year. In the non-competitive realm, Madonna partnered with Nebraska Game and Parks to create an adaptive marksmanship and archery program for adults and youth. They also partnered with Woods Tennis Center to develop and implement an adaptive youth tennis program. The goal of both programs is to break barriers so one day individuals with disabilities can compete against their able-bodied peers.

“I am extremely excited about what the future holds for our competitive sports programs. We have a possible future Paralympian,” said Recreation Therapist Rick Haith, Madonna’s adaptive sports coordinator. In order for this player to qualify and represent the United States in 2020, he will have to compete against players outside of our region in other parts of the country.

The Madonna Magic wheelchair basketball team finished the season with a national ranking of 18th. The impressive finish offered the team an opportunity to play in the national tournament, opening the door for future competition. The Madonna Miracles power soccer team showed tremendous progress this last season. “Their biggest accomplishment was improving their ability to communicate with trust and work together as a team,” said Rick. 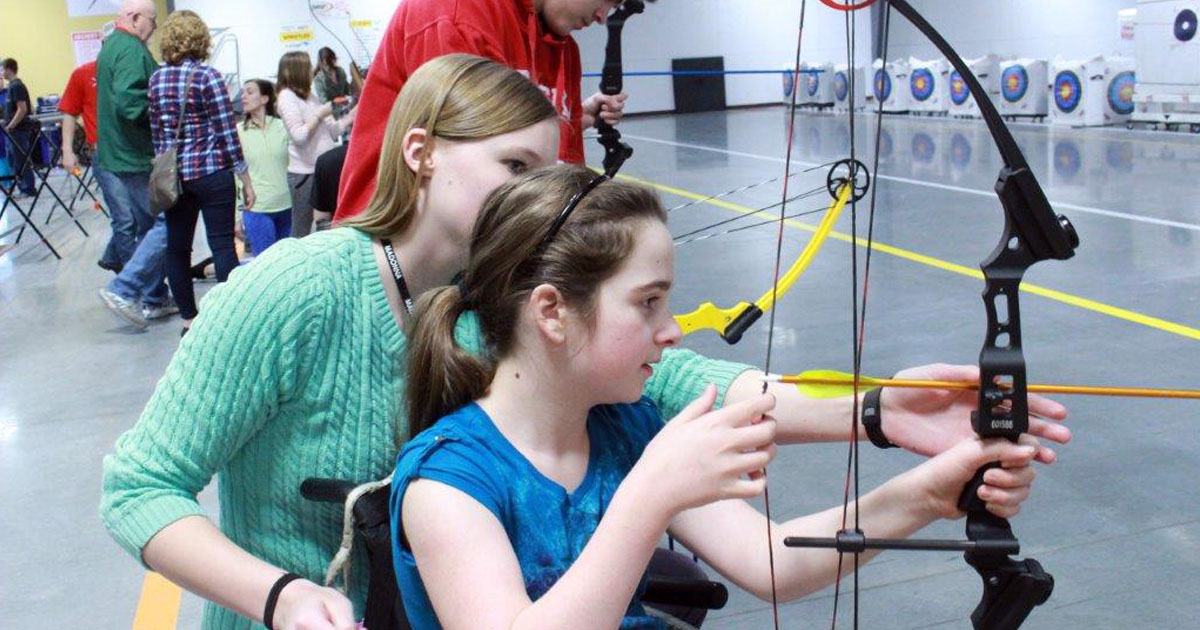 Madonna Adaptive Sports and Recreation participant Haley Inness aims at her target during a marksmanship outing at the Nebraska Game and Parks’ Outdoor Education.

“It is amazing how the adaptive sports and recreation program has grown over the years. Thanks to the adaptive sports team for their leadership and commitment: Rick Haith, Kristin Luethke, Amber Herrington, Mikayla Hanson, Molly Thomas and Lori Lane. Special thanks to the community organizations that contribute in so many different ways: Total Respiratory and Rehab, Woods Tennis Center, University of Nebraska-Lincoln (UNL) Women’s Soccer Team, Madonna ProActive, Nebraska Game and Parks and Lincoln Parks and Recreation,” said Linda Ohnoutka, program manager.

More community members have been reached this past year and the expansion of programs has increased participation. The future of the Adaptive Sports and Recreation program is bright.